(EXCLUSIVE) Traffic Robberies On The Rise In ‘Mega City’ Of Lagos

There is an alarming rise in traffic robbery in Africa’s commercial hub, which has posed a major source of worry for all road users and the government.

In Lagos today, especially in areas of heavy traffic, stories have been told of day and night robbers unleashing terror and mayhem on helpless road commuters and motorists.


Victims and eyewitnesses have shared pathetic tales of how the daredevil traffic robbers have defied the presence of security personnel and gone ahead to attack innocent road users, carting away valuables and sometimes, killing those who struggle with them.
In recent times, the fear of a traffic robber is the beginning of wisdom as motorists never toy with the opportunity to wind up completely when stuck in traffic. Surprisingly, the culprits seem invisible until they appear right before you, skillfully snatching your mobile phone, wristwatch, costly jewelry or a bag lying lazily on any of the car seats.
Other times, even when motorists wind up completely, and making good use of the central lock of the car, there have been instances where the car windscreen or window is smashed and valuable items whisked away in a heartbeat.
This has become a source of worry for motorists heading to work in the early hours of the morning, driving through traffic infested zones or heading home after a long hectic day at work.
Lagosians have since begun to express fears and concerns that the state is fast returning to the Pre Babatunde Fashola days, were things like these were a common occurrence.  Localities such as Oshodi, Mile 2, Okokomaiko, Cele, top the list of places were these criminals operate with reckless abandon — whether at day or at night — making motorists who ply those areas do so with their hearts in their mouths.
Lagosians have called on the government to look into the situation and create a lasting situation, as they can no longer drive on roads without being apprehensive of what atrocity, another traffic robber ahead, may have in store for them. 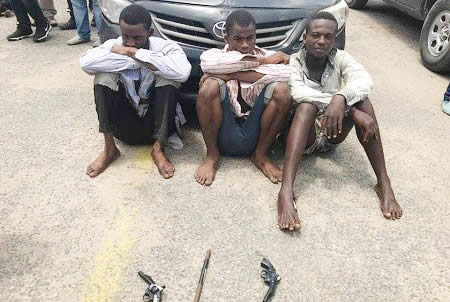 What police has done

Over the last couple of months, the Lagos State Police Command says it has doubled its efforts and introduced fresh strategies in order to combat the menace of traffic robbery in the state.
It appears that the strategies employed have yielded some good, as a series of the arrests that have been made, in an effort to rid the state of such activities.
For instance, in May 2019, the Lagos state police command announced the arrest of about 18 traffic robbers.
According to the command’s Public Relations Officer(PRO), Bala Elkana, the suspected traffic robbers were nabbed at various locations in the state.
Elkana also noted that the arrests were only possible because of the fresh strategies initiated by the state’s Commissioner of Police, CP Zubairu Muazu.
In an interview with Information Nigeria on Wednesday, the police spokesperson said the command has taken drastic measures to address the menace in the state. He noted also that surveillance patrol has been deployed to areas where they frequently received reports of traffic robbery.
According to Mr. Elkana, those robbers take advantage of traffic situations to rob motorists within a matter of minutes. Therefore to solve this, the police spokesperson said the command has deployed undercover police officers to crime-prone areas where they pretend as traders.
“In one week alone, we got close to nine suspects arrested and recovered a lot of weapons from them, ” he said.
He further revealed that 12 suspects were arrested in the other week and in subsequent weeks, there was a harvest of arrests and that is really bringing down the menace in the state.
Also, earlier this month, the command issued a strong warning to traffic robbers and cult members in the state to either quit their criminal lifestyle or leave the state completely.
The Deputy Commissioner of Police (Operations), Lagos State Police Command, Mr. Mohammed Ali, stressed that the command was working on new strategies to crack down and suppress the activities of these traffic criminals including cult members harassing citizens of the state. 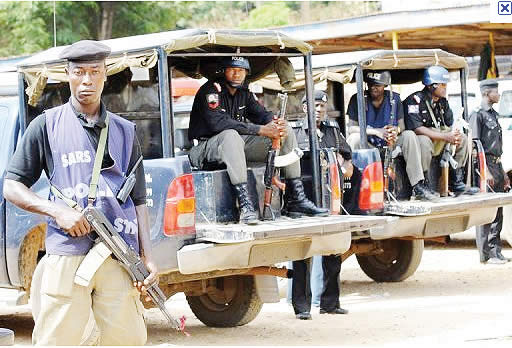 Speaking with journalists at the Command Headquarters, in Ikeja on July 3rd, he said: “Traffic robbers and cultists are criminals. My advice to them is to relocate out of Lagos, otherwise, we will dislocate them. Anyone arrested will be charged to court and end up in prison. Then, life to such a person will have no meaning.
“So, instead of wasting your life as a young boy or young person growing, by ending up in jail, why don’t you drop the idea of joining any of these groups of criminals- be it cultists, traffic robbers, armed robbers or kidnappers.

Information Nigeria, in separate interviews, spoke with a few residents who narrated how they watched in total confusion at the swiftness and skills these criminals employ as they carried out their activities in traffic.
Nnaemke Ezekwu said that he was in traffic at Oshodi, alone in his car when “the rogue entered my car and emptied my pocket, very bad experience, ” he said.
Abdul-Raheem Yaasir said: “my dad was robbed recently at Ikeja under bridge, they collected all his stuff and he is still facing a lot because of that day. Hmm, what a country!!!”
Muri Oladokun said: “Ladipo in Lagos state is a no go area and the police nearby are bunch of rubbish.”
“I was rubbed together with my colleagues in the vehicle, especially when a bystander hinted them that I was of the Oyo state Governorship aspirant, they started chasing my vehicle with knives and clubs, ” he said.
“When we reported to the police, the officer simply said “in the broad daylight”, the officer instead asked me for ‘egunje’ before he could commence investigation,” he concluded.
It appears these criminals are gaining more grounds with each passing day, as more Lagosians continue to get robbed of their valuables, day and night by these young men, who have mastered their act to near perfection. The government and all appropriate authorities must rise above rhetorics and tackle this menace headlong before it grows into an uncontrollable one.