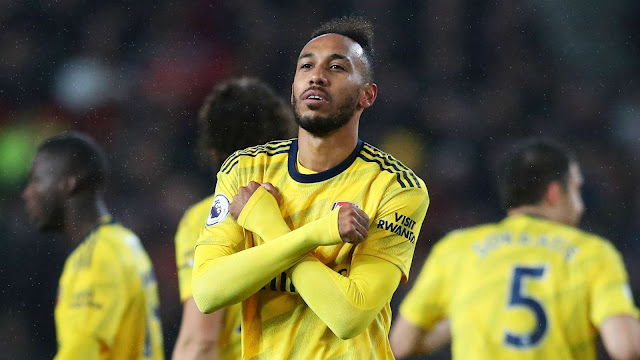 Manchester United and Arsenal played out a 1-1 Premier League draw that does little for either side's hopes of earning Champions League qualification by finishing in the top four.
Scott McTominay's first-half strike put United in front at a wet Old Trafford on Monday but Arsenal struck back 13 minutes into the second period through the prolific Pierre-Emerick Aubameyang.
A low-quality match saw few chances to snatch all three points thereafter, McTominay having the best opportunity to win the game but failing to convert a United corner while Marcus Rashford's free-kick was saved by Bernd Leno in added time.
In driving Manchester rain it took until the 29th minute - the longest wait in the league this season - for the game's first shot, Leno saving easily from Andreas Pereira's low drive.
The match slowly opened up with Nicolas Pepe testing David de Gea at his near post, the goalkeeper then making a fine double save to deny Bukayo Saka and Matteo Guendouzi.
United struck moments before half-time, McTominay lashing home a stunning 20-yard strike for his first Old Trafford goal after Daniel James and Marcus Rashford led a rapid break.
Arsenal hit back in the 58th minute as VAR correctly overruled a terrible offside decision from the linesman after Axel Tuanzebe gave the ball away in a bad position.
Bukayo Saka seized on Tuanzebe's loose pass and fed Aubameyang, who stole through to beat De Gea with a clever chipped finish for his seventh Premier League goal of the season.
Paul Pogba bent a shot just wide as United tried to respond then McTominay should have restored their lead from an Ashley Young corner, planting a free header well over the crossbar.
United looked likelier to win it late on but Leno brilliantly saved from Rashford before De Gea had to deny substitute Reiss Nelson at the death.
GOAL
Tags # Sports
Share This