THIS WEEK EPISODE: The Story of ORISHA OSHUMARE (RAINBOW GOD OF THE YORUBA TRIBE) - The Naija Weekly

THIS WEEK EPISODE: The Story of ORISHA OSHUMARE (RAINBOW GOD OF THE YORUBA TRIBE)

After the creation of heaven , Earth , and all the great divinities, Olodumare ordered the orisha of rainbow called osumare to strike a signal across the earth , indicating that creation has been completed.

Osumare (pronounced O-SHU-mar-RAY) is the Yoruba Orisha of the rainbow, Osu (Months) mare(a part of Gods name-oloduMARE).
Osumare resides at the back of huge mountains, part of his duty is to beautify the sky with great colors , showing both humans and the irunmole's that Olodumare is still the beginning and the end.

An alternate name is Ketu. Especially when using the name Ketu, Osumare is connected to the spirits of the dead, the ancestors, called the eggun (pronounced E-goo-N).

He also conveys messages through the rainbows from earth to heaven and from heaven to earth.
Osumare symbolizes the union of heaven and earth, and the balance between people and the Orishas.

He is simply the symbol of unity and balance whatever sacred tasks Oshumare was assigned to do, it is restricted to only the sky. To the elders, whenever a Rainbow is spotted early in the morning, the whole year will abound with tranquility, plenty of money, comfort and good health to all of the world.

One website (written by a practitioner, which I think is an important distinction to make) says that some people believe that Osumare is male, others female, and still others that Osumare is Someone in between, balancing male and female energies.

This author says that his father believed Osumare to be a female Orisha. Almost all the art I found depicted Osumare as male, but some had the male Osumare wearing female clothing, like the picture below.

(I’m purposely not using any gender pronouns myself, which is very difficult when you aren’t used to it! I’m writing in this way because I’m trying not to influence how this Deity is perceived by my readers. I’d like those who are interested to discover Osumare for themselves.)

This ambiguousness seems to make many people today uncomfortable, and so Osumare is pushed aside and buried, or quickly skipped over. Making information difficult to find. What we are able to discern, as far Osumare’s stories and functions, is that Osumare was a personification of the rainbow.

Like I said above, Osumare carried messages and performed tasks for Olorun, the ruler of the heavens. Olorun is the name of the God Who rules the heavens, and the name of the heavenly realm itself. (Similarly, in Greece, Iris was the Goddess of the rainbow can considered the Messenger of Hera, similar to Hermes being the Messenger of Zeus. The rainbow carrying messages to earth from heaven seems to be in many different cultures). Osumare is supposed to symbolize the union of heaven and earth, and the balance between people and the Orishas. 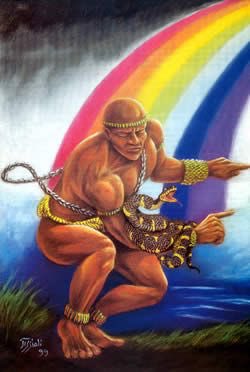 If Osumare is a symbol of unity and balance, then the androgyny could make perfect sense — perhaps Osumare is the balance between male and female energy as well. That’s conjecture on my part btw.


Osumare apparently helped in the creation of the world, but by carrying out whatever sacred tasks were arranged, was restricted to the sky.

When Osumare asked “What about when I wish to donate gifts to the people in the land?”


Olodumare, the Creator, replied that Osumare could dispense blessings to the people every third year, in the early hours of the morning when the sun rises. In another myth Osumare helped to cure the blindness of Olodumare.
Osumare literally means rainbow serpent. The rainbow serpent controls movement, change, mobility. Osumare rules transformation and anything that goes in cycles, such as rain and drought, poverty and wealth. Some of the stories say that the rainbow serpent holds the world together, wrapping around the universe, with 3500 coils above and 3500 coils below.
Osumare is a guardian and protector of children, and controls the umbilical cord as well, which sounds strange and a little arbitrary at first. But the Yoruba considered the umbilical cord to a link between our living world and the world of the ancestors.
Note the multicolor👇

When a child is born, the umbilical cord and placenta would be buried under a tree, preferably a palm tree. But no one but the parent of the child would know which tree, so that evil doers would not have power over the child when he or she has fully grown.


Oshumare is also called the “Crown of Yemoyale” -Birth Mother of ODU, Some of the offerings to Osumare are cold water, wild honey, beautiful flowers, white powder, perfume, and duck
The best day to worship Osumare is Sunday, One of Osumare’s titles is “Owner of the colored Belt”
Now you know the story of Orisha Osumare.
Please note we have 401 gods in the Yoruba history, just stay with us, I am preparing more stories for you as I work on my book too.


NEXT EPISODE: SANGO (The God of Thunder) The GREAT GOD OF THE YORUBA KINGDOM
Tags # Articles # TOURISM & CULTURE
Share This

TOURISM & CULTURE
Posted by: The Naija Weekly at September 08, 2019