Azeez Adejumo October 02, 2019 Sports,
Tammy Abraham displayed the impeccable timing of a natural goalscorer as he found the net on his birthday and Willian made a case for his enduring quality with a late winner on his 300th Chelsea appearance.
Abraham's first goal in the Champions League eased Chelsea ahead in northern France and issued a reminder to Gareth Southgate as he prepared to name his squad on Thursday for Euro 2020 qualifiers against the Czech Republic and Bulgaria.
Southgate is expected to include Abraham and it will be interesting to see if he selects Fikayo Tomori who created the first goal in Lille. The England manager will be acutely aware both are eligible for Nigeria if he overlooks them and Tomori can also represent Canada. 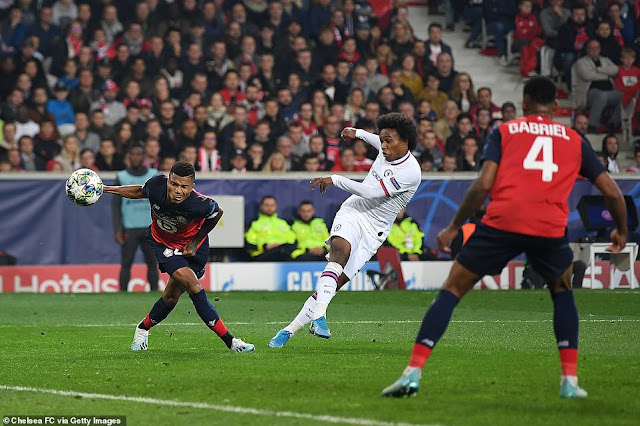 The future looks bright for Lampard's young Eurostars with a Champions League debut for 19-year-old Reece James and an important contribution from Callum Hudson-Odoi, the 18-year-old winger who replaced him and supplied the cross for the winning goal.
The icing on the cake, however, came from 31-year-old Willian, the oldest player in the starting line-up, who met the ball from Hudson-Odoi with a volley which skidded into the turf and flashed up past goalkeeper Mike Maignan.
Victory eases the pressure on Chelsea in Group H ahead of two daunting fixtures against Ajax and Lampard can savour a tactical switch that worked out well and helped him gain his first Champions League points as a manager.
He started with a back-three and flexed into a back-four, sending on Hudson-Odoi for James and the change of shape gave Chelsea extra impetus.

His defence creaked and wobbled at times. They conceded from a corner and were vulnerable at set-pieces but Kepa Arrizabalaga produced an excellent performance in goal.
'There's a long way to go in the group but having lost against Valencia it put more importance on this game,' said Lampard. 'It's such a tough place to play, with the roof on and the crowd up for it, and the speed in their team on the counter-attack was evident.
'Our performance was really good and we deserved to win. The kids are doing well but this isn't a game for niceties. We have to go and win these games. The Champions League level is something else.'
Chelsea, boosted by the return of N'Golo Kante in the midfield, dominated possession with Lille content to sit deep, let their visitors have the ball and hope for a mistake or a quick break out of defence.
Abraham fired Chelsea ahead with a goal in the 22nd minute on his 22nd birthday. Picked out by a pass from Tomori, he turned and finished coolly. Lille appealed for offside but the replays proved there was no offence.
'Tammy is hungry for goals,' said Lampard, who revealed the squad celebrated the occasion with cake on the eve of the game for Abraham and Michy Batshuayi who turned 26 on Wednesday.
As for the England speculation, the Chelsea boss added: 'Tammy is handling that as he handles everything in life; he takes it with enthusiasm and happiness, and a desire to work.
'He wants to be the best and with that comes international recognition and the next decision on that is for Gareth. I don't want to tell him what to do. But with Mason, Tammy and the way Tomori is playing, they've given themselves a chance.' 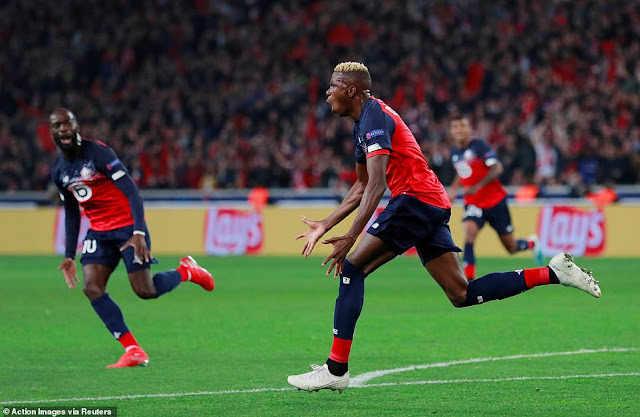 Lille responded to the opening goal by offering a little more adventure. A quick break and a low shot by Luiz Araujo forced a save from Kepa.
Chelsea survived at the expense of a corner but were unable to relieve the pressure. This corner led to another from which Victor Osimhen climbed high above Kurt Zouma and Tomori and headed in the equaliser.
Jorginho hit post with a curling shot from 25 yards before the interval but the contest was far more even in the second half with Lille threatening again from corners and Chelsea were grateful to have Kepa in excellent touch.
The Spain 'keeper made a fabulous save with his fingertips to deny Benjamin Andre and a brave stop at the feet of Osimhen after a lapse by Tomori.
Even when he made a slip in the closing seconds he was able to recover with another splendid save and complete the cross-Channel raid.