Liverpool 4-3 RB Salzburg: Mohamed Salah settles seven-goal Champions League thriller at Anfield after Austrian side had pulled back from three down - The Naija Weekly

Home Sports Liverpool 4-3 RB Salzburg: Mohamed Salah settles seven-goal Champions League thriller at Anfield after Austrian side had pulled back from three down

Liverpool 4-3 RB Salzburg: Mohamed Salah settles seven-goal Champions League thriller at Anfield after Austrian side had pulled back from three down

Azeez Adejumo October 02, 2019 Sports,
At full-time three pitch invaders ventured on to the Anfield turf only to be stopped by some rather determined stewarding. Had Liverpool's defenders been anywhere near as resolute then Jurgen Klopp's team would not have come so close to catastrophe in their favourite competition.
This was Liverpool's hundredth home game in the European Cup and it was another belter. It has become the norm in recent times. Nevertheless, some serious issues underpinned what happened here.
In conceding a three-goal lead to their Austrian opponents, Liverpool were in trouble with half an hour to go. Having lost their first group game in Naples, this was one the European champions really had to win. 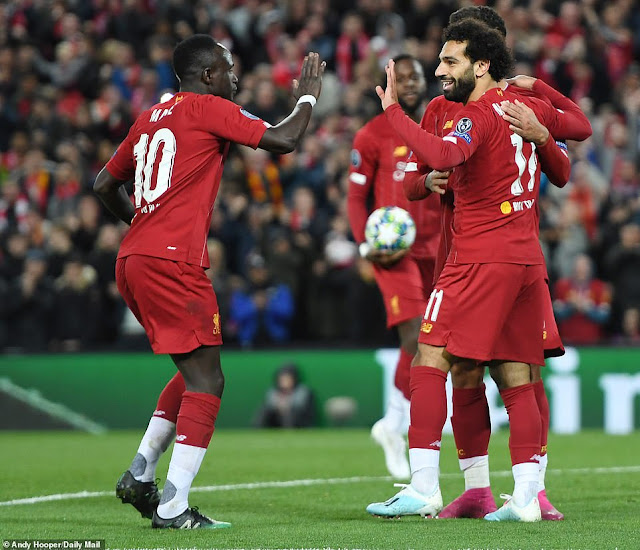 Ultimately they were saved by their own ability to conjure goals at will. The manner in which Liverpool responded to the threat of calamity reflected well on them and once Mohamed Salah crashed his team back in to the lead with 20 minutes left they were never in trouble again.
However, the way Salzburg undressed Liverpool during a spell of attacking football either side of half-time will concern Klopp. It may seem a strange thing to say about a team that has won all seven of its Premier League games but some of Liverpool's defensive work has not been as secure as their manager would like this term.
Here, Liverpool were made to look very ordinary by some clever, dextrous football from Salzburg that briefly embarrassed them. Not only did Hwang Hee-chan, Takumi Minamino and substitute Erling Braut Haaland score in the 40th, 56th and 61st minutes to turn this game upside down, Salzburg created other chances in this period too.
Virgil van Dijk probably had his worst half an hour as a Liverpool player while, defensively at least, Trent Alexander-Arnold was also troubled. When Haaland – son of the former Manchester City player Alf-Inge – scored the equaliser, Klopp stood on the touchline and grinned the way you do when you don't want anyone to know how utterly bemused you really feel.
As a spectacle, it was brilliant. Salzburg had been three down after 35 minutes and seemingly heading home with a hiding to reflect on. Yet here they were, passing and moving through the red ranks of the Premier League leaders to prove to the rest of Europe that the form that has given them a plus-31 goal difference after only eight games of the Austrian league does indeed travel.

Backed by an increasingly fanatical following, Salzburg ran hot on adrenaline during that purple patch at the start of the second half. Had they scored next after drawing level, nobody would really have been surprised.
Earlier, they had struggled. Liverpool have a big Premier League game at home to Leicester on Saturday, but they began with their minds on the job and eased through the gears in to what appeared to be a comfortable lead.
Salzburg's defending at this stage was no better than Liverpool's was a little later. Both Liverpool full-backs were allowed to advance at will and Salzburg suffered terribly as a consequence. It was so easy for Alexander-Arnold and Andy Robertson for a while that we wondered whether Salzburg had even scouted their opposition properly.
Liverpool scored their first in the ninth minute as Mane and Roberto Firmino played a one-two for the former to score against his old club. Just over 15 minutes later, Robertson began a superb flowing move in his own half and after Jordan Henderson and Salah funnelled the ball out to Alexander-Arnold, the Scot arrived at speed to convert the low cross gleefully from six yards.
It was easy for Liverpool at this point, too easy. Salzburg did threaten on the break – Minamino was particularly dangerous – but were so defensively lax that nobody was surprised when goalkeeper Cican Stankovic pushed a Firmino header tamely in to the path of Salah for the third goal nine minutes before the interval.

By now Stankovic and his defenders wore the haunted, fearful look typical of so many that come to Anfield and get rolled over. Briefly the scoreboard in the corner by the Kop mistakenly flashed 3-3 but nobody had any reason to suspect that was at all portentous.
How quickly a goal can change a game, though. When Hwang left Van Dijk on the seat of his pants to score beautifully in the 40th minute, Salzburg sniffed opportunity and when Minamino crashed in a volley at the far post in the 56th minute, Liverpool suddenly looked in need of smelling salts.
At this stage both teams were swapping chances at will but that was never likely to benefit Liverpool.
An open, fractured game suited Salzburg rather than the team in the lead. Liverpool needed to slow the game down and stem the bleeding but they could not, Haaland scoring at the far post after Van Dijk and Fabinho left the job of closing down Minamino to each other as he crossed unchallenged to a player who has scored so prolifically in Austrian football this season.
The scores were now level and it seemed scarcely believable. Ultimately Salah rescued Liverpool and his confident finish as he ran on to Firmino's cushioned header means that what happened here will now be looked upon as some kind of curiosity.
It could have been altogether more significant, though. Good teams cannot afford to make a habit of winning too many games in this way.