Azeez Adejumo October 01, 2019 Sports,
Alberto Salazar, the coach who oversaw the most successful period in Sir Mo Farah's career, has been banned from athletics for four years for doping offences.
The explosive development follows a four-year investigation by the US Anti-Doping Agency into the work done by the coach, who runs the Nike Oregon Project, where Farah trained between 2011 and 2017 – a time in which the Brit won his four Olympic gold medals.
Dr Jeffrey Brown, who treated numerous Salazar athletes, has also been banned for four years. 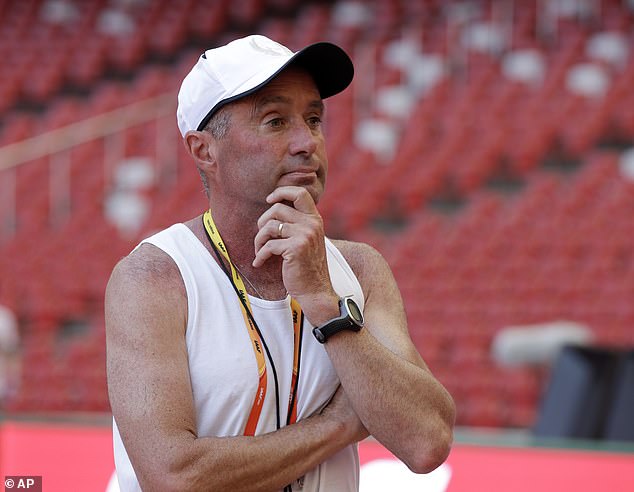 The Times reported charges were brought in March 2017 against Salazar by USADA for possession of the banned substance testosterone, 'tampering' with an investigation and breaches of the WADA code relating to infusions.
A statement from USADA CEO Travis Tygart read: 'The athletes in these cases found the courage to speak out and ultimately exposed the truth. While acting in connection with the Nike Oregon Project, Mr Salazar and Dr Brown demonstrated that winning was more important than the health and wellbeing of the athletes they were sworn to protect.'
In response, a statement by Salazar and the Nike Oregon Project read: 'I am shocked by the outcome today. Throughout this six-year investigation my athletes and I have endured unjust, unethical and highly damaging treatment from USADA.
'This is demonstrated by the misleading statement released by Travis Tygart stating that we put winning ahead of athlete safety.
'This is completely false and contrary to the findings of the arbitrators, who even wrote about the care I took in complying with the World Anti-Doping code:
'The Panel notes that the Respondent does not appear to have been motivated by any bad intention to commit the violations the Panel found.

'In fact, the Panel was struck by the amount of care generally taken by Respondent to ensure that whatever new technique or method or substance he was going to try was lawful under the World Anti-Doping Code, with USADA's witness characterising him as the coach they heard from the most with respect to trying to ensure that he was complying with his obligations.'
'I have always ensured the WADA code is strictly followed. The Oregon Project has never and will never permit doping.
'I will appeal and look forward to this unfair and protracted process reaching the conclusion I know to be true. I will not be commenting further at this time.'
A USADA statement added: 'Following two evidentiary hearings, Salazar's lasting seven days and Brown's lasting six days, and a lengthy post-hearing review of all the evidence and testimony, the AAA panel found that Salazar and Brown possessed and trafficked a banned performance-enhancing substance and administered or attempted to administer a prohibited method to multiple track and field athletes.
'The panel also found that both athlete support personnel committed tampering and complicity violations under Articles 2.5 and 2.9 of the World Anti-Doping Code.'
It went on: 'The panel determined that Salazar committed the following violations of the Code: 1) Administration of a Prohibited Method (with respect to an infusion in excess of the applicable limit), 2) Tampering and/or attempted tampering with the doping control process, 3) Trafficking of testosterone, 4) Trafficking of testosterone through involvement in a testosterone testing program in violation of the rules.'
USA Track and Field (USATF) said Salazar had been sent home from the World Athletics Championships in Doha: 'USATF learned overnight that USADA announced late Monday that two independent three-member panels of the American Arbitration Association (AAA) rendered their decisions in the cases of Alberto Salazar and Dr. Jeffrey Brown, determining that each should receive a 4-year sanction for orchestrating and facilitating prohibited doping conduct.
'USATF's commitment to clean sport and a level playing field for all athletes cannot be overstated. USATF's focus remains on the health and well-being of its athletes.
'USATF has taken the steps necessary to have Mr. Salazar's IAAF World Championships accreditation deactivated.'
IAAF said in a statement: 'On the request of USATF, the IAAF can confirm that Mr Alberto Salazar's IAAF World Championships accreditation has been deactivated.'
Farah said he was relieved the ordeal was over and has maintained he did not break any rules during his time with Salazar.
He said: 'I'm relieved USADA has, after four years, completed their investigation into Alberto Salazar. I left the NOP (Nike Oregon Project) in 2017 but as I've always said, I have no tolerance for anyone who breaks the rules or crosses a line. A ruling has been made and I'm glad there has been a conclusion.'
A statement from UK Athletics, who cleared Farah to continue working with Salazar after a review in 2015, said: 'The Board of UK Athletics acknowledges the announcement made by USADA concerning the four-year sanction imposed on Alberto Salazar.
'The Board and Performance Oversight Committee (POC) will now review the arbitration decision in full prior to making any further comment.
'It should be noted that at all times UK Athletics fully cooperated with both USADA and UKAD throughout the investigations. Furthermore the Performance Oversight Committee's own investigation in 2015 was restricted to the interaction of the Nike Oregon Project with Mo Farah. and not an anti-doping investigation. Such investigations can and should only be undertaken by the relevant anti-doping authorities.'
'UK Athletics is 100 per cent committed to Clean Athletics through investment in athlete education, supporting comprehensive testing programmes, and full cooperation with both UK and International Anti-Doping Authorities.'
Farah, who has always denied any wrongdoing, stayed with Salazar until 2017 after the allegations first surfaced in 2015. A UK Athletics review into the Nike Oregon Project in 2015 found no wrongdoing. UKA performance director Neil Black has previously spoken of his support for Salazar.