The LIONESS OF LISABI, FUNMILAYO RANSOME-KUTI - The Naija Weekly

The LIONESS OF LISABI, FUNMILAYO RANSOME-KUTI

The LIONESS OF LISABI, FUNMILAYO RANSOME-KUTI OF NIGERIA, one who with all humility and happiness I am going to share with you all somethings you already know and some you need to know about her.

To the hands of chief Daniel Olumeyuwa Thomas and Lucretia Phyllis Omoyeni Adeosolu of the Jibolu-Taiwo family.

Being the son of a returned slave from Sierra Leone, who painstakingly traced his ancestral history back to Abeokuta, Ogun State, Nigeria.

She attended Abeokuta Grammar School for her secondary education, and later went to England for further studies. She soon returned to Nigeria and became a teacher.

On 20 January, 1925, she married the Reverend Israel Oludotun, Ransome-Kuti. He also defended the commoners of his country, and was one of the founders of both the Nigeria Union of Teachers and of the Nigerian Union of Students.

Upon her return, she organized literacy classes for Women in the early 1920s and founded a nursery school in the 1930s. She founded the Abeokuta Ladies' Club (ALC) for educated women involved in charitable work in 1942. 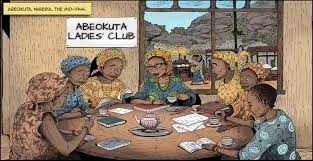 She also started the social Welfare for Market Women club to help educate working-class women (which formed the first adult education program for women in Nigeria).

Mama received the national honour of membership in the Order of the Niger in 1965.

The University of Ibadan  bestowed upon her the honorary doctorate of laws in 1968. She also held a seat in the Western House of Chiefs of Nigeria as an Oloye of the Yoruba people. 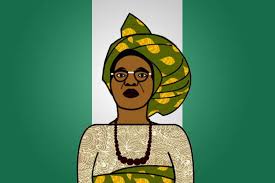 In 1946, she opened the membership of ALC to include market women who were generally poor and illiterate, changed the name of ALC to Abeokuta Women’s Union (AWU). Between 1947 and 1949, she rallied women to protest against price controls that were hurting the female merchants

In 1949, she led a protest against the kingship of Abeokuta (Alake of Egbaland) alleging abuse of power by the Alake on the issue of collecting taxes from women and oversaw the abolishment of separate taxes for women. 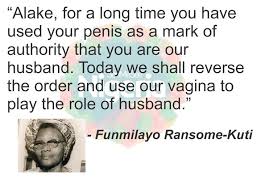 Through the avenue of AWU, she organized several workshops for the empowerment of illiterate women in Abeokuta, including the first adult education program for women in Nigeria. Her intention was to raise the standard of living for women and to eliminate causes of poverty.

Mama Oloye was a member of the National Council of Nigeria and the Cameroons party (NCNC), where she was the treasurer. She later became the president of the Western NCNC women’s association, but was later expelled from the NCNC when she was not elected to a federal parliamentary

After her expulsion she started the Commoners People’s Party (CPP) to challenge the ruling NCNC prior to the independence of Nigeria and was one of the delegates who negotiated Nigeria’s independence from Britain. 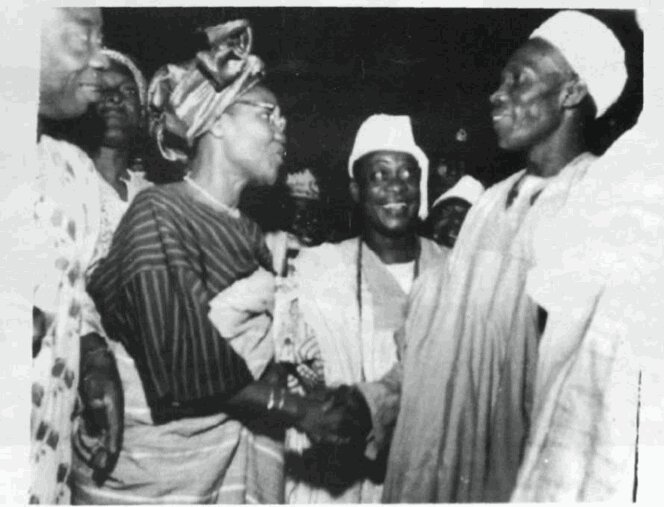 Madam Funmi Ransome-Kuti was part of the delegation that negotiated Nigeria’s independence from Britain in the 1950’s. She was already considered a communist by the West during the cold but that didn’t stop her from wanting the best for her countrymen.

She ultimately denied ncnc victory in her area. She received 4,665 votes to the NCNC's 9,755, thus allowing the opposition Action Group (which had 10,443 votes) to win.

During the Cold War and before the independence of her country, Nigeria mama funmi Ransome-Kuti travelled widely and angered the Nigerian as well as British and American governments by her contacts with the Eastern Bloc.

This included her travel to the former USSR, Hungary and China, where she met Mao Zedong. In 1956, her passport was not renewed by the government because it was said that "it can be assumed that it is her intention to influence … women with communist ideas and policies."

She was also refused a U.S. visa because the American government alleged that she was a communist.

She won the Lenin Prize for peace in 1971. The Nigerian, American and British governments alleged she was trying to influence Nigerian women with communist ideas. 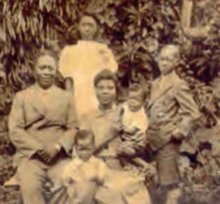 In old age her activism was overshadowed by that of her three sons, who provided effective opposition to various Nigerian military juntas.

In 1978, Ransome-Kuti was thrown from a third-floor window of her son Fela's compound, the prestigious Kalakuta Republic, when it was stormed by one thousand armed military personnel.

She lapsed into a coma in February of that year, died on 13 April 1978, as a result of her injuries.