Azeez Adejumo October 01, 2019 Sports,
This was a game that came and went in a flash for Tottenham. A minute before half-time, they were level at 1-1 and by the 55th minute they were 4-1 down. A season of mystifying discontent had just got a whole lot worse.
By the end it was seven and the German fans were in full mocking mood. 'Football's Coming Home', they sang and although that will mean little to Spurs manager Mauricio Pochettino, the scale of his problems at Totteham need absolutely no clarifying.
What this will mean for Pochettino in the short-term is unclear. But this will embarrass him and should worry him greatly. No amount of cryptic words - his speciality in press conferences this season - can cover this up. This was a humbling that will ask the greatest questions yet of his reign at the club. 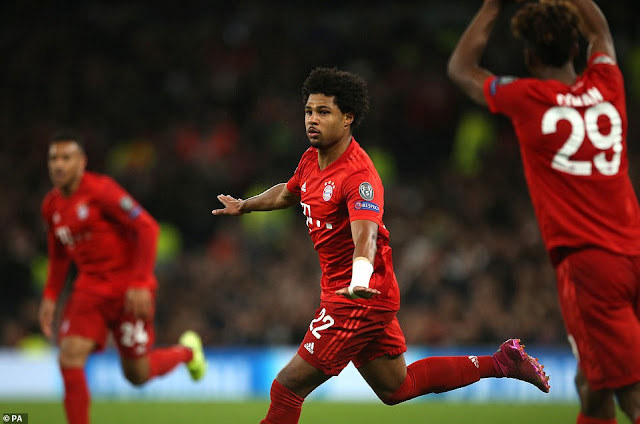 The facts of the game were startling. Tottenham played well early on and led through Son-Heung min. They missed other chances too and played well for a period. But goals from Joshua Kimmich and Robert Lewandowski gave Bayern a half-time lead and two early strikes from Serge Gnabry in the second effectively ended the game.
Gnabry - once of Arsenal and then of West Brom - was to end up with four goals. He scored twice more near the end and Lewandowski managed another too. At 4-1 Harry Kane had scored a penalty and briefly Spurs threatened to get back in to it, as unlikely as that sounds.
But by the death this was like a Turkey shoot for the Germans and we begin to wonder if Pochettino will still be around by Christmas. This cavernous stadium suddenly felt a little empty at half-time. A swipe of Lewandowski's right boot had sucked all the air from the occasion. Tottenham had played very well and had been the better team for half an hour. But at this level of the game you tend to get punished if you don't score when you are on top and as such Tottenham were suddenly on the wrong side of things after 45 minutes.
It was a gripping game, open and quite fractured at times. Spurs looked as though they had a hold on the Bayern defence from the very first minutes and they created five good opportunities in the opening 26 minutes. But Pochettino's team only scored once and that meant that when the German side found their way in to the game, they were still within reach on the scoreboard.
Tottenham were always dangerous when moving forwards. Their midfield had a strong and powerful look about it and Moussa Sissoko and Tanguy Ndombele were using the full width of the field as they looked to create the angles for Son and Harry Kane to exploit up front.

Hugo Lloris actually made the first notable save of the night, diving to his left to parry a strong shot from Serge Gnabry. But that was an isolated threat early on as Tottenham played some neat, incisive football that put Bayern largely on the back foot.
Son had three good chances in the first 12 minutes and finally converted the third one. Ndombele played the Korean in twice in the space of four minutes and both times Son was denied by Manuel Neuer. Both those shots were delivered by Son's left foot but he eventually scored with his right.
Corentin Tolisso inexplicably gave the ball the way inside the Bayern defensive third and his team were immediately in trouble. The Frenchman suggested that he had been fouled but he clearly hadn't been and when Sissoko played Son through the inside right channel the low right foot shot flew across Neuer and inside his right hand post.

It was a lead Tottenham thoroughly deserved. They had been purposeful and ambitious and dominant. All of which made it all the more disappointing that they allowed Bayern to equalise within three minutes.
Joshua Kimmich's right foot shot was whipped across Lloris from 25 yards and was wonderfully struck. Tottenham, though, will wonder why they hadn't cleared the ball more effectively in the preceding passage of play.
Still Tottenham pushed on. Kane rounded Neuer only for Gnabry to clear and then Son and Ndombele were denied by Neuer. The second chance, set up by the overlapping Serge Aurier down the right, was a particularly good one and how Spurs must have wished it had been taken as Bayern found their true selves and pushed the home team back.
Lewandowski's goal was superb, a turn and low shot from 20 yards. It was struck like a bullet and Tottenham immediately began to look a little wounded.
If they were injured at half-time, Tottenham were dead by the hour, both mortal blows inflicted by Gnabry. Tottenham were too open, too vulnerable, and Bayern cut them to ribbons.

Gnabry's first came in the 53rd minute as he exchanged passes with Benjamin Pavard, strode away from Aurier and cut inside to finish low with his right foot. Two minutes later, Harry Winks lost possession to Tolisso in a terrible area and when the ball was fed to Gnabry he dragged a shot across Lloris with his left to score off the post.
On the touchline, Pochettino looked a little lost and so did his team. Almost immediately Kane scored a penalty after Danny Rose was caught clumsily by Kingsley Coman and had Sissoko not despatched a half volley over from 12 yards with 25 minutes to go this game may have swung on its head again. Soon after that, substitute Christian Eriksen brought a fingertip save from Neuer with a right foot shot from 25 yards. Spurs had not given up but neither had Bayern and that was the problem.
As Tottenham pushed on at the end, Bayern picked them off and a heavy defeat became a disaster.
What a night it ultimately was for Gnabry. He scored twice at the death to bring his second half tally to four. Lewandowski also helped himself to another late one and at the end this was one of those scorelines that once required a bracket on the TV video printer.
Tottenham 2 Bayern Munich 7 (SEVEN).