‘Marlians Don’t Do Drugs Unless It Is Prescribed’ – Naira Marley

Controversial Nigerian singer, Naira Marley has sent a word of advice to his staunch fanbase dubbed Marlians.
The ‘Soapy crooner’ who has been affiliated with the negative influence on society on several levels has now come out to advise his fans against the abuse of drugs.
Taking to his Twitter, the singer sent a not of advice to warn his fans not to do drugs. He then went further to say they can do so only if it’s prescribed.
His first tweet read: 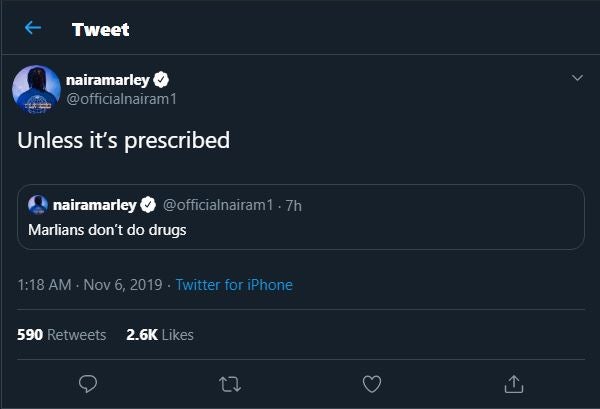 Despite his post on Twitter, his tweet is incoherent with his lifestyle. His songs are drenched with lewd lyrics and his posts on Instagram often promote usage of illicit drugs.
Naira Marley has remained one of the most talked-about celebrities in the entertainment industry in 2019. His songs and controversial lifestyle has served as a major concern in the Nigerian authorities and conservatives in the nation.
The singer’s court case was recently adjourned till December 11.
Equally important, Naira Marley, popular for his “Am I a Yahoo Boy” and “Soapy” tracks; is being prosecuted by the EFCC on an 11-count charge of conspiracy, possession of counterfeit cards and fraud. Furthermore, his co-defendant is one Yad Isril, said to still be at large.
Meanwhile, the defendant was first arraigned on May 20, 2019, but pleaded not guilty. He secured bail with two sureties.
According to the charge, the defendant committed the offences on different dates. Specifically, these dates were stated as between November 26, 2018, December 11, 2018, and May 10. Additionally, Fashola and his accomplices allegedly conspired to use different Access Bank ATM Cards to defraud their victims.
They allegedly used Access Card number 5264711020433662 issued to other persons; in a bid to obtain fraudulent financial gains.
Meanwhile, Fashola was said to have possessed these counterfeit credit cards, belonging to different cardholders; with intent to defraud, and which also constituted theft.
The offences contravene the provisions of Section 1 23 (1)(b), 27 (1}, 33, 33(9) Cyber Crime (Prohibition) Prevention Act, 2015.
Tags # Entertainment
Share This

Entertainment
Posted by: The Naija Weekly at November 07, 2019