Jose Mourinho is determined to get Dele Alli back to his best form after the midfielder showed signs of improvement in the 3-2 win at West Ham.
First-half goals from Son Heung-min and Lucas Moura – both incisive attacks – were added to by Harry Kane’s header after the break as Tottenham won away in the Premier League for the first time in 308 days, even though late goals from Michail Antonio and Angelo Ogbonna skewed the scoreline.
Mourinho was happy his side got the job done in his first game and he also had words of praise for Alli, who was pipped to the man-of-the-match award by Son.
“I was happy with everyone, but if you ask if I was happy with Dele, then yes,” Mourinho said. “I spent a few minutes with him in training and also in our social life, outside the pitch.
“The best Dele has to be back. He’s too good not to be in the national team, he’s too good to not be a fundamental player for Spurs and he’s too good to not be one of the best players in the world.
“So he has to develop. He has to start from now, hopefully, without injuries and with some stability from a tactical point of view.
“He’s a fantastic player and today he showed that so I’m happy for him.” 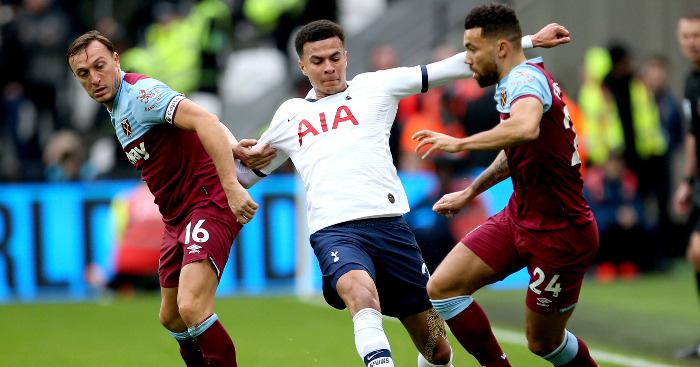 Alli said he felt he had been performing well this season, despite Tottenham’s results.
“I think individually I haven’t been playing that bad,” he told BT Sport. “I have to just keep getting better.
“A lot of people ask me if I’m going to find my old form, but I don’t want to find that form, I want to get better than that and improve.
“People might think I’ve played bad today and people might think I played good but for me, we won so I’m happy.”
Alli said Tottenham were capable of going on a winning run after today’s result.
He added: “We have to carry that momentum on and keep winning. You’ve seen it before, we can go on brilliant runs of form and wins.
“We’ve just got to make sure we start that from now. It was a great performance today.
“There’s still a lot we need to work on and it should never have been that close towards the end. We’ll keep improving on moving forward.”
Tags # Sports
Share This