Former Chairman of the Federal Inland Revenue Service (FIRS), Babatunde Fowler, wrote to the Secretary to the Government of the Federation (SGF) Boss Mustapha, seeking for a second term before he was replaced on Monday by President Muhammadu Buhari.

The Presidency on Monday replaced Fowler with a tax expert, Muhammad M. Nami.

The announcement was contained in a statement by the Senior Special Assistant on Media and Publicity, Mallam Garba Shehu.

The Eagle Online reports that Fowler wrote to Mustapha on the need to renew his tenure.

The letter, dated December 9, 2019, was titled: “Re: Notification of Expiration of Tenure as Executive Chairman, Federal Inland Revenue Service.”

In the letter, Fowler wrote: “I write to notify the Secretary to the Government of the Federation that my first tenure as the Executive Chairman of the Federal Inland Revenue Service (FIRS) end today 9th of December, 2019.

“In view of the above, I wish to present myself for reappointment for a second term. This is consistent with the provisions of the FIRS Establishment Act 2007 and would grant me the opportunity to consolidate and build on the achievements we have recorded in the past 4 years.

“Please find attached the highlights of my achievements during my first tenure in office.

“I would like to put on record my gratitude to Mr. President for the opportunity to serve the Nation. I am also thankful for your support in the course of the discharge of my duties.

“Please accept as always, the assurance of my highest regards.” 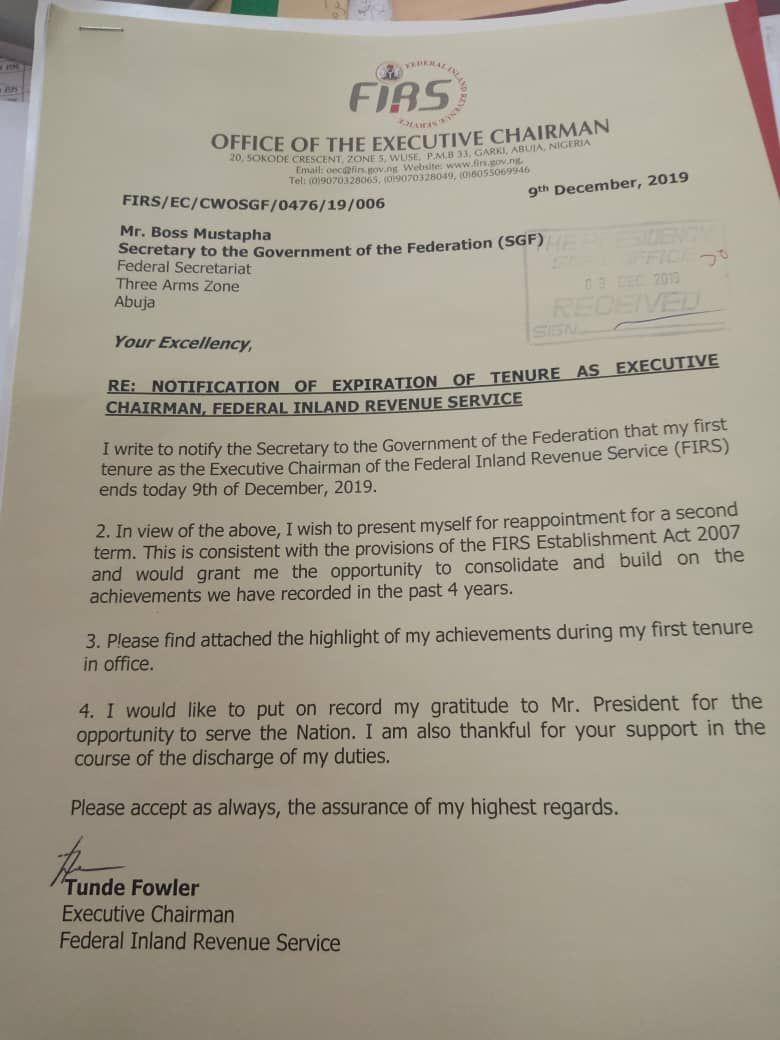 Featured
Posted by: The Naija Weekly at December 09, 2019