The body buried today is not Abba Kyari, he was cremated in Ikoyi -Kemi Olunloyo - The Naija Weekly

Home Featured The body buried today is not Abba Kyari, he was cremated in Ikoyi -Kemi Olunloyo

The body buried today is not Abba Kyari, he was cremated in Ikoyi -Kemi Olunloyo

Nigerian Investigative journalist, Kemi Olunloyo has claimed that the burial rites done for the late Chief of Staff, Abba Kyari was an arranged plot.

The controversial news breaker asserts that Mallam Kyari died in Ikoyi and was cremated -A time period was not specified. Kemi further revealed that the corpse that was buried today was one Dauda, an inner aide of the late Abba Kyari.

Read her tweets below:

"Nigerians pls STOP sending me the same footage of a man removing a hazmat suit outside a cemetery I’m a trained Investigative Journalist. Already told you Mr Kyari was flown to Lagos, died in Ikoyi, cremated. No INFECTED body was moved to Abuja. He’s from Borno"


"Correction: He’s from Maiduguri side. Dauda his Aide is from Daura. I’m concerned if that was Dauda they buried. He infected most of the Daura cluster and was flown back to Abuja for Quarantine. We never heard from him again. 11 people he had contact with died of flu symptoms" 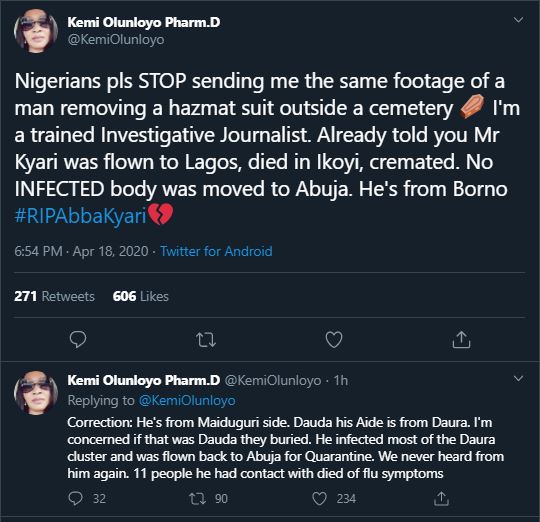