Werner next? The eight players Chelsea have signed from the Bundesliga - The Naija Weekly

Home Sports Werner next? The eight players Chelsea have signed from the Bundesliga

Werner next? The eight players Chelsea have signed from the Bundesliga

Chelsea appear to have won the race for Timo Werner after reportedly meeting the £54million release clause in his contract.

The RB Leipzig striker has scored 31 goals in 40 appearances in all competitions this season and is regarded as one of the hottest properties in Europe.

We’ve taken a look at the eight players Chelsea have signed from the Bundesliga since 2000 to see how their imports from Germany have generally fared.

Pulisic joined Chelsea from Borussia Dortmund in 2019 and had the unenviable task of replacing Eden Hazard at Stamford Bridge.

He has endured a difficult start to his Premier League career and his debut season has been disrupted by injury problems.

The USA international has still has shown glimpses of his quality for Chelsea and scored a perfect hat-trick against Burnley in October 2019.


Chelsea splashed out £15million on Rahman in 2015 as they looked to appease an increasingly frustrated Jose Mourinho.
The left-back failed to earn a regular place in the team, making just 15 Premier League appearances as Chelsea slumped to a 10th-placed finish in 2015-16.
Rahman is still on the books at Chelsea, but he has spent the last four seasons on loan at Schalke, Reims and now Mallorca.

After a promising first season at Chelsea, Schurrle fell behind Eden Hazard and Willian in the pecking order in 2014-15.
The winger returned to Germany with Wolfsburg in January 2015 and revealed that his Chelsea career was bizarrely ended by a bad piece of chicken.
“I had really bad salmonella,” Schurrle told the Daily Telegraph in 2018. “I was getting really weak. I was out for maybe three weeks, and coming back, I never really got the chance to prove myself being back 100 per cent.
“That was when I got the opportunity to go back to Germany, and he (Mourinho) let me go. “You see how skinny I am, so to lose three, four, five kilos, it took me a really long time to get the strength back. It was a bit of chicken, and I’ve never eaten chicken since.”

Big things were expected of Marin after he was signed from Werder Bremen in 2012, but he struggled to make an impact at Stamford Bridge.
The German saw limited playing time under Roberto di Matteo and Rafael Benitez, making just 16 appearances in all competitions.
He went on to endure loan spells with Sevilla, Fiorentina, Anderlecht and Trabzonspor before eventually securing a permanent move to Olympiakos in 2016.

Signing a 28-year-old Pizarro, with over 100 Bundesliga goals to his name, on a free transfer from Bayern Munich seemed like shrewd business in 2007.
But a debut goal against Birmingham City was followed by just one more strike, coincidentally in the return fixture against Birmingham.
The striker returned to Germany with Werder Bremen in 2008, first on loan, and then permanently the following year.

Boulahrouz joined Chelsea from Hamburg in 2006 and eyebrows were raised when the defender decided to pick the highly-coveted No. 9 shirt.
“I had to pick a number and the kit man from Chelsea started with No. 9,” Boulahrouz told Fox Sports in 2019.
“And then he continued with 45, 47… So my thought was ‘I’m not gonna play with a number like that’ so I said ‘Okay, give me No. 9’.”
He still played in defence and struggled to break up the incredible centre-back partnership between John Terry and Ricardo Carvalho, making 20 first-team appearances before joining Stuttgart in 2008. 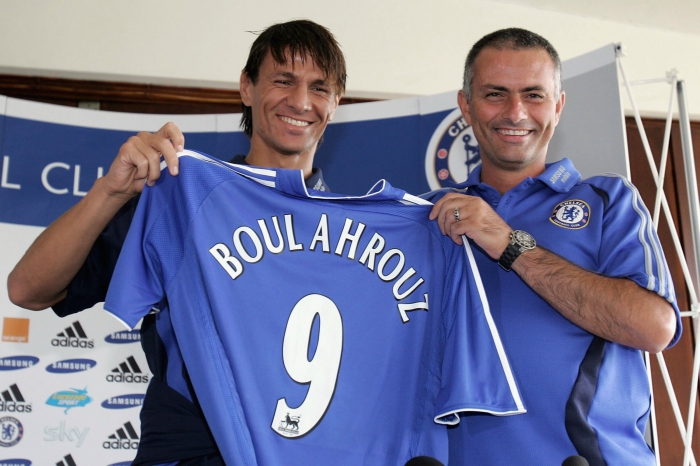 Ballack is undoubtedly the best signing Chelsea have made from the Bundesliga.
After rejecting a new contract from Bayern Munich, he joined the Blues on a free transfer in 2006 and formed a sensational midfield trio alongside Frank Lampard and Michael Essien.
The Germany international made 166 appearances during his four years at Stamford Bridge, leaving with two FA Cups, the League Cup and a Premier League title.

Kneissl was only 17 when he joined Chelsea from Eintracht Frankfurt in 2000, and he was tipped for a bright future at Stamford Bridge.
But the midfielder failed to live up to his potential and returned to Germany in 2005 without having made a single first-team appearance for the Blues.