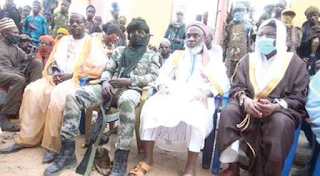 Nigerians on Tuesday called on the Federal Government to order the arrest and investigation of popular Islamic scholar, Sheikh Ahmad Gumi, over his interactions with bandits in the country.

Of late, Sheikh Gumi has been seen in photos holding talks with notorious bandits in the forests of Zamfara, Niger and other states. He had also advocated blanket amnesty for the bandits like was done for the militants in the Niger Delta region.

The PUNCH also reported that Sheikh Gumi said bandits had only killed a “few” people accidentally, adding that they killed for “revenge”.

Sheikh Gumi’s latest comment attracted outrage on social media with many users describing him as the spokesperson for bandits in the country.