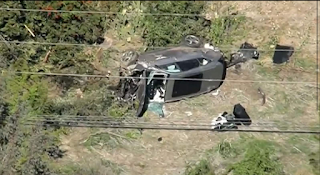 US golfer Tiger Woods was hospitalized Tuesday after a car crash in which his vehicle sustained "major damage," the Los Angeles County Sheriff's department said.

Woods, the sole occupant, was removed from the wreckage by firefighters and paramedics and taken to a local hospital for treatment, a statement said.

The extent of his injuries was not known. The roll-over collision near Los Angeles did not involve any other vehicles.