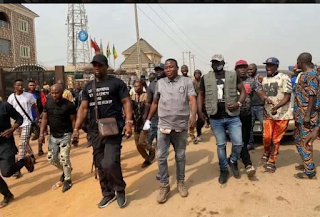 PREMIUM TIMES gathered from sources close to Mr Igboho that the acclaimed activist was accosted by security operatives attached to Operation Burst while on his way to Lagos.

Mr Igboho did not respond to our correspondent’s calls and text messages seeking full details of what happened.

The state’s police spokesperson, Olugbenga Fadeyi, did also not respond to calls and text messages either.

But Femi Fani-Kayode, a former minister of aviation and ally of Mr Igboho, confirmed the incident.

He said Mr Igboho was going to meet an elder statesman, Ayo Adebanjo, when the attempted arrest occurred.

Mr Fani-Kayode shared a short clip of the scene.

“I just spoke to my brother Sunday Igboho. He told me there was a violent attempt to arrest him this afternoon by a joint team of soldiers, DSS operatives & policemen numbering about 40 on the Ibadan/Lagos Expressway whilst he was on his way to see Baba Ayo Adebanjo in Lagos.

“I condemn this attempt to ambush and abduct him. It is not only reckless but also very dangerous. If the security agencies want to see him, all they need to do is to invite him to their offices. I am not aware of any crime that he has committed and I urge restraint on all sides.

Let me also send a warning to the FG (federal government) that Sunday Igboho is a hero to millions of Yorubas and either killing him or detaining him unlawfully would be the biggest mistake they could make. Building bridges, dialogue and peace is better than violence and war. A word is enough for the wise”, he wrote on Twitter.

Mr Igboho was in the news recently for issuing an eviction notice to Fulani herdsmen in South-West Nigeria, over reported cases of kidnappings and killings allegedly perpetrated by herdsmen.