EU, US Step Up Pressure On Myanmar Junta As Protesters Defy Death Threats - The Naija Weekly

EU, US Step Up Pressure On Myanmar Junta As Protesters Defy Death Threats 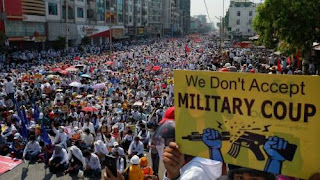 The European Union warned it is considering sanctions on Myanmar while the United States penalized two more generals for links to the military coup, as Western countries sought to press the junta to avoid a violent crackdown after weeks of protests.

A general strike shut businesses in the Southeast Asian country on Monday as huge crowds gathered peacefully despite a warning from authorities that confrontation could get people killed.

"The generals are losing their power to intimidate and with it, their power. It is past time for them to stand down, as the people of Myanmar stand up," Andrews said on Twitter.

More protests are planned for Tuesday.

Overnight, EU governments showed support for those seeking to reverse the Feb. 1 coup and the release of Aung San Suu Kyi's elected leader.

"We are not prepared to stand by and watch," German Foreign Minister Heiko Maas said in Brussels, adding that sanctions could follow if diplomacy failed.

The European Union is considering sanctions that would target businesses owned by the army, but the bloc ruled out any curtailing of its trade preferences to avoid hurting poor workers.

Myanmar's security forces have shown more restraint since the coup than in earlier confrontations with those pushing for democracy in almost half a century of direct military rule.

Even so, three protesters have been killed - two shot dead in the second city of Mandalay on Saturday and a woman who died on Friday after being shot more than a week earlier in the capital, Naypyitaw.

The army has said one policeman died of injuries sustained during the protests. It has accused protesters of provoking violence.

After alleging fraud in Nov. 8 elections, the army seized power in which Suu Kyi's party trounced a pro-military party, detaining her and much of the party leadership. The electoral commission dismissed the fraud complaints.