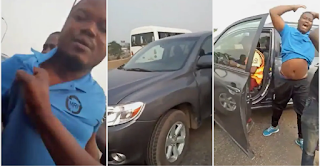 Sunday Okodo, the driver of a Sports Utility Vehicle who tipped a policeman over a bridge along the International Airport Road, Lagos state has been indicted.

According to The Punch, Okodo was arraigned before the Yaba magistrate court on Thursday, February 25, for driving in the direction prohibited by law (one-way). It was gathered that the offense is punishable under Part (III) item 25 of the ‘Lagos State Transport Sector Reform Law of 2018 which attracts a one-year jail term and forfeiture of the vehicle to the state government.

Meanwhile, Lagos state police spokesperson, Muyiwa Adejobi, said the officer who was tipped over the bridge, has been discharged from the hospital. Adejobi in a statement identified the police inspector as David Zapaina, adding that the victim sustained a fracture.

The incident caused serious gridlock along the bridge as the driver was forced to stop his vehicle while pedestrians and an official of the Lagos State Traffic Management Authority (LASTMA) tried to contain the situation.