Northern elders disown Gumi, say he’s on his own - The Naija Weekly

Northern elders disown Gumi, say he’s on his own 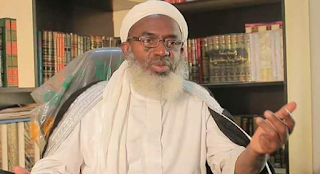 A coalition of Northern elders on Wednesday dissociated themselves from recent comments credited to an Islamic cleric, Sheikh Abubakar Gumi, who had become an emissary for bandits in forests across Kaduna, Zamfara, Katsina, and Niger States.

THE PUNCH reported that during one of such meetings, he alleged that non-Muslim soldiers had carried out orchestrated killings in some communities, precipitating anger.

"What I want you people to understand is, soldiers that are involved in most of the criminalities are not Muslims. You know, soldiers have Muslims and none Muslims. The non-Muslims are the ones causing confusion just to ignite a crisis," he told a delegation led by the Secretary to the Niger State Government on a negotiation mission for the release of the kidnapped Kagara students.

But the elders under the aegis of North East Elders for Peace and Development said Gumi's allegations were not a representation of the position of the region, saying the public must see the same as “his personal sentiments".

While urging the general public to discountenance the allegations, the NEEPD in a statement by its Coordinator, Zana Goni, vowed to resist attempts by any individual or group to profile the military.

According to them, the need for prominent groups and organisations in the North to condemn Gumi's dangerous claims had become necessary, in order not to give the impression that he was speaking for the region.

By his statement, the said Gumi may be justifying armed banditry and all that was associated with the crime.

The NEEPD said, “As Northern elders committed to a united and indivisible nation, we hasten to condemn in very strong terms the allegations made against the Nigerian military by one of our leading Islamic scholars, Sheikh Abubakar Gumi

"We rise in one voice to dissociate ourselves from the dangerous and divisive allegations levelled against our patriotic soldiers by Sheikh Gumi, in one of his missions to meet with bandits in a forest around Niger State.

"Ordinarily, we would have commended the Sheikh for daring to do what authorities failed, but for the profiling comments attributed to him, which we consider abhorrent and unhelpful to national development and peace.

"We warn that comments such as this have the potential of pitting the exposed soldiers against general areas in the North, where they have continued to put down their lives to protect the territorial integrity of the nation from those that seek to violate it.

"Our concern is further hinged on the possibility of the world concluding that the North may be offering tacit endorsement to banditry and associated crimes against society.

"To douse this tension, therefore, we call on relevant authorities, including prominent individuals and groups from the North,to condemn Gumi's position in a manner that will absolve the region of conspiracy and vicarious liability, in the long run.

"In whatever position we find ourselves, we must, at all material times, endeavour to put the collective interest of Nigeria over and above all other considerations, bearing in mind the fact that when the country collapses, it will do so on all of us, regardless of religion, ethnicity, or belief.

"Lastly, we urge Gumi to stop approbating and reprobating at the same time, and to immediately call-off his mission, if he has developed lethargy in the course of undertaking visits to deep forests.”