You are a Fulani terrorist, Ortom fires Bauchi Gov - The Naija Weekly

You are a Fulani terrorist, Ortom fires Bauchi Gov 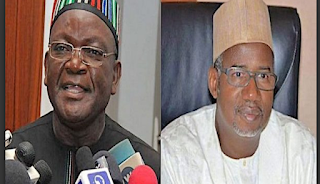 Benue Governor Samuel Ortom has taken a swipe at his Bauchi counterpart Bala Mohammed, describing him as a Fulani terrorist .

Addressing journalists at Government House Makurdi on Monday, Ortom ,who was reacting to an earlier attack on him by Mohammed, also alleged the Bauchi Governor may be among the armed Fulani who want to kill him

“Some herdsmen wrote me a letter that they will kill me from the way and manner my brother and Governor of Bauchi spoke in support of herdsmen carrying arms, I suspect that he is one among the Fulani who wants to kill me and should anything happen to me they should not look far,” Ortom stated.

He expressed shock that a Governor, who took oath to safe guard lives and property, will openly support armed herdsmen who came from Ghana, Niger, Libya etc to kill in Nigeria.

He warned herdsmen who carry arms should go to Bauchi and not stay in Benue .

On allegations he launched a blistering attack on President Muhammadu Buhari, Ortom said it was harmless advice to the presidency on the worsening security situation in the nation.