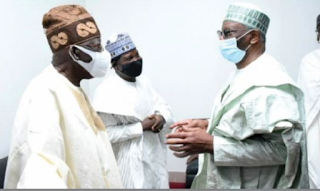 Speakers and ex-speakers of the Houses of Assembly in the Northwest geo political zone have declared their support for Asiwaju Bola Tinubu ahead of the 2023 elections.

Their endorsement is coming weeks after their colleagues in the Southwest also stamped Tinubu for the election. At a meeting in Kano State, the lawmakers said Tinubu remained the right person for the presidential ticket of the All Progressives Congress (APC).

Speaker of the Lagos State House of Assembly Mudashiru Obasa lead the Southwest team. According to a statement yesterday by Obasa’s Chief Press Secretary, Eromosele Ebhomele, the lawmakers said Nigeria deserves a detrabilsed Nigerian who has the capacity to lead the country, especially with its current challenges.

They praised Tinubu for uniting the southwest, and noted that his leadership qualities are scarce in other parts of the country declaring. This, they described, as an advantage for the country. The speakers promised to start grassroots mobilisation ahead of the elections.

Former Speaker of the Kano State House of Assembly Yau Abdullahi Yanshana described Tinubu as a worthy leader ‘who would take Nigeria to better heights’.

He said: “We should now be thinking beyond him being the flagbearer of the APC, and concentrate on securing victory for him in the actual election. We know that 90 per cent of the party structure was built by Tinubu. We assure him that 95 per cent of votes from Kano will be in favour of the APC national leader.

Former Deputy Speaker of the Jigawa State House of Assembly Abu Dauda said Tinubu becoming the president would mean consolidating on his passion to make Nigeria great. “If not him, then who? If not now, then when?” Dauda asked.