2023: Tinubu, El-Rufai, Others Who Are Above 60 Years Won’t Be Allowed To Rule Nigeria — Fayemi - The Naija Weekly

Home Politics 2023: Tinubu, El-Rufai, Others Who Are Above 60 Years Won’t Be Allowed To Rule Nigeria — Fayemi

2023: Tinubu, El-Rufai, Others Who Are Above 60 Years Won’t Be Allowed To Rule Nigeria — Fayemi 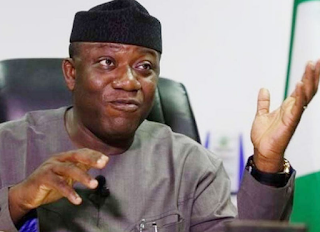 Ahead of the 2023 presidential election, the Chairman of the Nigerian Governors Forum, Dr Kayode Fayemi, Thursday, declared that presidential aspirants who are above 60 years of age would not be allowed to rule the country.

Though Fayemi did not specifically mention names,  but it should be noted that National Leader of the All Progressives Congress (APC), Bola Tinubu and Kaduna State Governor,  Malam Nasir El-Rufai, who are eyeing the presidency are well above 60 years.  Tinubu will be 70 by 2023 while El-Rufai will be 63.

Fayemi, who is also the governor of Ekiti state, called on the youth to launch themselves into the Nigerian political terrain in the 2023 general elections and dictate who becomes president and governors of the 36 states.

The governor, who spoke in Abuja at the National Youth Summit and Conference organised by the Nigerian Youth Congress (NYC), was represented by his Special Adviser on Federal Matters, Hon. Makinde Araoye.

Fayemi, who chaired the occasion, called on the youth to take charge in 2023, said aside from political offices, their energy and wisdom would also be useful in other aspects of the country’s economy.

“One thing I can tell you is that we the Nigerian youths are not going to allow anyone above the age of 60 years to run for president. Nigerians have suffered enough. Enough is enough. It is not by saying, we have to go into action and we have to mobilise.’’

The Chairman, Governing Board of NYC, Dr Yakub Shedam, in his address, said with proper government’s direction, the Nigerian youths would curb banditry.

Shedam also called on the federal government to include members of the group in its programmes and politics, saying that NYC is apolitical, rather, a movement to actualize a one-Nigeria for the youth that devoid of religious and ethnicity biases.

Also, the NYC President, Comrade Blessing Akinlosotu, who stated that the Nigerian youths formed 65-70 percent of the country’s population, said: “How has this great numerical strength being translated into good governance/leadership and economic prosperity?’’.

On the summit, he said: “This National Youth Summit is a very strategic and important one as its resolutions will be presented to the Federal Government, National Assembly, and the Nigeria Governors’ Forum to be worked on for proper implementation for the betterment of the Nigerian youths’’.