Busload of RCCG members kidnapped in Kaduna - The Naija Weekly 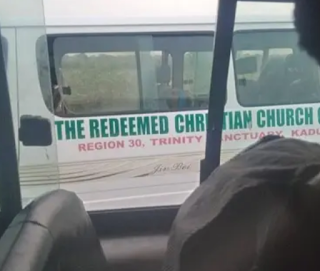 A busload of members of the Redeemed Christian Church of God (RCCG) was on Friday evening abducted by gunmen in Kaduna, Kaduna State.

He did not release further details on the identities and number of the victims.

However, a church source in Kaduna said the abducted persons were “adult missionaries, male and female, from Kaduna Province 1 going to Kafanchan for prayer work.”

As of 9.25 p.m. on Friday when he spoke to Tribune Online, he said the kidnappers had not got in touch with the church and family members of the abducted persons.

An engineer, Mr Eje Kenny Faraday, who said he “narrowly escaped being a victim,” had broken the news on his Facebook wall with the photograph of the empty bus around 7.00 p.m. on Friday.

“All passengers in the bus are just kidnapped along Kachia Road, Km 63 from Kaduna,” he posted on his Facebook wall.

The inscription on the side of the bus reads, ‘The Redeemed Christian Church of God, Region 30, Trinity Sanctuary, Kaduna’. Mr Faraday, in reply to a commenters’ enquiry as to when the incident happened, wrote: “Today. Not long ago. I was almost a victim.”

The Kaduna State police command could not be reached for comment on the incident as of 9.34 p.m. when the spokesperson’s telephone number was called.