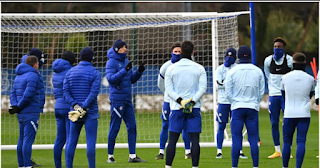 Chelsea advanced to the Champions League quarterfinals for the first time since 2014 in style after beating Atletico Madrid 3-0 on aggregate after both legs of their fixtures.

Having claimed a 1-0 triumph in the reverse fixture last month, the Blues maintained their dominance over the Spanish League outfit with a 2-0 win at Stamford Bridge.

A goal each from Hakim Ziyech and Emerson ensured the London club extended their unbeaten run to 13 games since the arrival of Thomas Tuchel in late January.

Meanwhile, after booking their place in the last-eight of the competition, the 2012 winners have now been predicted to face Paris Saint Germain in the next phase.

Meanwhile, it will an all-English quarterfinal between Liverpool and Manchester City according to SunSport simulations.

Other pairings that came were provided by randomresult.com threw up some tasty last-eight ties with Chelsea set to battle PSG who were taken to the final by current Blues boss Tuchel.

With the Reds tipped to battle Man City, it will be another battle between the two managers who met at the same stage of the competition three years ago.