E Choke: It’s getting out of hand - Davido says as he plans to copyright slang - The Naija Weekly

Home Entertainment GIST/VIRAL News E Choke: It’s getting out of hand - Davido says as he plans to copyright slang

E Choke: It’s getting out of hand - Davido says as he plans to copyright slang 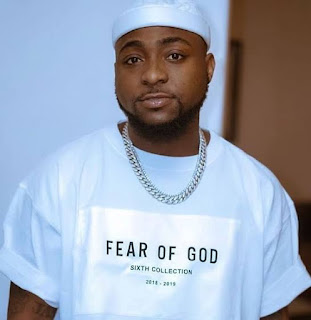 Popular Nigerian singer, Davido, has been responsible for popularising a number of slangs in the country, one of which is ‘tule jor’.

However, the music star’s latest slang, e choke, seems to have been more wildly accepted that he envisaged.

The popular ‘e choke’ slang was used by the singer on different occasions and a number of his fans all over the country took to it. Now, not a day goes by when ‘e choke’ is not used in conversations on social media. 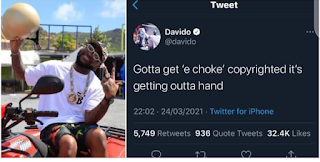 Well, Davido has decided to make a business move regarding the slang. In a new post shared on Twitter, the Risky crooner said that he has to get ‘e choke’ copyrighted. According to him, it had gotten out of hand.