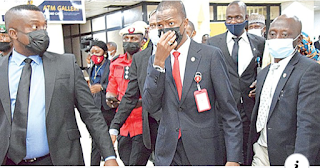 In what will be consider as good catch, about fifty-seven cyber fraud suspects have been arrested by officials of EFCC at four hotel hideouts in Ilaro, Ogun state.

This was disclosed by EFCC spokesman, Wilson Uwujaren, PM News reports. He said the suspects were arrested in Yewa Frontier Hotel & Resort, Ellysam Hotel & Suits, April Suits and IBD International Hotels. The suspects were involved in a range of cyber crimes, from love scams on numerous dating sites to obtaining money by false pretences.

Uwujaren said the suspects will be charged to court as soon as investigations are concluded.

Recall that Legit.ng had reported that youths suspected to be internet fraudsters better known as "Yahoo boys" stormed the Oke Omiru end of Osogbo-Ilesha road and barricaded the expressway in a demonstration against the Economic and Financial Crimes Commission (EFCC). According to The Punch, the protesters began their demonstration on Tuesday morning, February 9, over alleged harassment by the operatives of the anti-graft agency.