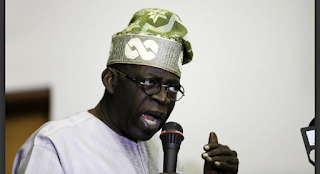 The national leader of the All Progressives Congress (APC), Bola Tinubu, has reacted to the recent crisis between crop farmers and herders in Nigeria.

Mr Tinubu, in a statement Saturday, said the destruction of crops or seizure of property of an innocent farmer or herder is an act of criminality.

PREMIUM TIMES in the past has reported how the crisis between herders and farmers have led to the destruction of farms and eviction of several herders in some Southwest states.

Mr Tinubu recommended that the federal government should convene a meeting of state governors, senior security officials, herder and farmer representatives, along with traditional rulers and religious leaders to hammer out a set of working principles to resolve the crisis among others

STATEMENT ON THE HERDER CRISIS

The herder-farmer dispute has taken on acute and violent dimensions. It has cost too many innocent lives while destroying the property and livelihoods of many others. It has also aggravated ethnic sentiment and political tension. Despite the efforts of some of those in positions of high responsibility and public trust, the crisis has not significantly abated. Sadly, others who should know better have incited matters by tossing about hate-tainted statements that fall dangerously short of the leadership these people claim to provide. We all must get hold of our better selves to treat this matter with the sobriety it requires.

Because of the violence that has ensued and the fretful consequences of such violence if left unabated, we must move in unison but decisively to end the spiral of death and destruction. Only when the violence and the illogic of it are halted can logic and reason prevail. Until the violence is rolled back, we cannot resolve the deep problems that underlie this conflict. We will neither be able to uplift the farmer from his impoverished toil nor move the herder toward the historic transformation which he must make.

Yet, as vital as security is to the resolution of this matter, we must realize security measures alone will not suffice. Enhanced security may be the necessary first step, but it cannot be the only step. Nor do we resolve this by hitching ourselves to emotional, one-dimensional answers. More to the point, those who cast this as exclusively a matter of ethnic confrontation are mistaken. This is no time for reckless chauvinism of any kind, on either side of this dispute. This matter is not ethnic in factual origin or actual causation although in the minds and hearts of too many it has become ethnic in recrimination and impulsive action.