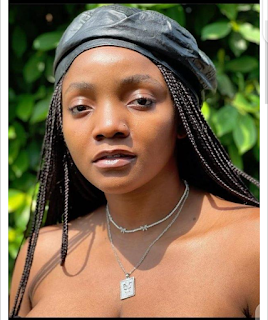 Afropop singer, Simi reacts to the claim of shading Davido by using his catchphrase, ‘e choke’ while congratulating the two Grammy winners, Burna Boy and Wizkid.

Not long after the Grammys announcement, Simisola Gold took to her Twitter page to send a congratulatory message to the Awards Winners.

What seemed to be a congratulatory message for her sent a weird message to others as many see it as a shade against Davido.

In a now-deleted tweet, the mother of one wrote; 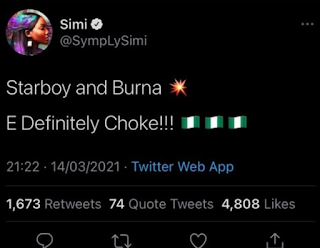 Fans dragged her for deliberately shading Davido with the popular slang “E choke” that was mentioned in her tweet.

Simi, however, rebuked the claims of shading no one and the tweet was unintentional.  This was after the tweet went viral and she had been dragged for it.

In her debunking tweet against shading Davido, she tweets;

“Loool FFS I LOVE David and I LOVE Wiz. I was celebrating the winners and used the slang just as a SLANG. A friend said to remove it cos fans thought it was shade and so I did. It didn’t even occur to me at all.

WHAT WOULD BE THE POINT OF ME SHADING EITHER OF THEM?? To what end?” 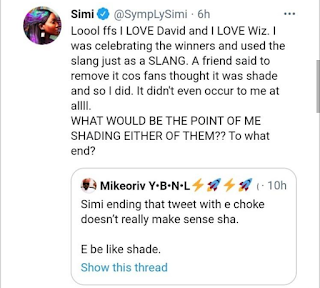 However, in a new tweet, the Duduke singer, Simi re-tweets a proper congratulatory message to Burnaboy and Wizkid.