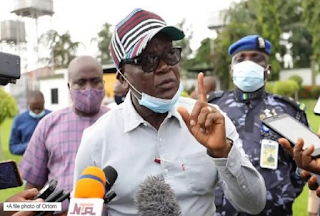 Governor Samuel Ortom on Saturday credited God, his security aides and his physical fitness for his escape from death at the hands of some people he identified as herders.

The governor alleged that he was attacked on his farm at Tyo-mu on the Makurdi-Gboko Road by about 15 gun carrying men.

He called for the arrest and prosecution of leaders of Miyetti Allah Kautal Hore who he alleged had singled him out for assassination at a recent meeting in Yola, Adamawa State.

However, a former chairman of Miyetti Allah in Benue State, Garus Gololo, dismissed Governor Ortom’s claim as a mere propaganda and an excuse by him to avoid paying workers’ salary at the end of the month.

Ortom’s party, the PDP, condemned the alleged attempt on his life and demanded the arrest and prosecution of the brains behind the plot.

Narrating his ordeal to reporters in Makurdi moments after escaping the attack, the governor said he ran for more than one kilometer on foot as the herders swooped on his entourage.

“I thank God for my fitness to have run for more than one and a half kilometres without stopping,” he said.

“It means that God has given me strength and I am grateful to God.”

He said the six security aides who were with him did a yeoman’s job, taking on the 15 armed herders who came for his life.

While the security aides engaged and repelled the bandits, Ortom said he seized the opportunity to take to his heels, running a distance of over one and a half kilometres.

His words: “I appreciate the security men attached to me. They were able to repel them and they could not have access to me.

“And I thank God for my fitness to have run for more than one and a half kilometres without stopping. It means that God has given me strength and I am grateful to God.

“I don’t have problems with any Fulani man or Fulani race. But I have a problem with Fulani bandits who have vowed to take over Nigeria as their ancestral home. And I say no. Not when I am here and when I am governor leading my state.

“If I can’t go to farm as a governor with the entire security around me, then who else can go to farm? You can imagine the pains that we have here in Benue State.

“Thank God for Mr President who responded to my letter that anyone with AK-47 should be shot on sight. I’m yet to see that. Let me see it happen in Benue State.

“I have reported this to the security agencies and I hope that this will be done so that the land will be safe for our people to go back to farm and do their work and survive and live their lives.

“I want to call on Mr President, on the security agencies to fish these people out. They are in the forest between Makurdi and Abinse.

“They are living there and they are coming out to commit atrocities – rape women, kill our people, maim them, destroy our farmlands. And anytime the security agencies go after them, they run across the river and back to the forest.”

An eyewitness told The Nation last night that Ortom’s understanding of the terrain went a long way in saving his life yesterday.

The witness said the governor and his security aides had gone to the large-scale farm on foot after parking their vehicles along the highway.

The vehicles were not driven to the farm because of the terrain, which was rated as “marshy and un-conducive for them.”

Unknown to them, the attackers had laid an ambush.

It was learnt that it was while going round the different segments of the farm that the attackers struck and opened fire on Ortom.

After the successful evacuation of Ortom and his details, Operation Whirlstroke troops were drafted to the farm settlement and its adjoining areas.

The troops were still on the trail of the suspected attackers at press time.

A top source said: “The governor has a large-scale multi-purpose farm around Makurdi, the state capital.

“On Saturday, the governor took time off to go to the farm along Makurdi-Gboko Road. Due to the terrain, his vehicle and those of his security escorts parked by the roadside and trekked to the farm.

“It was while they were trekking that the attackers, who had already hidden on the farm, shot at the governor and his team.

“Ortom ran for more than one kilometre, navigating the farmstead to where all the vehicles were parked.

“I think his familiarity with the farm curves saved his life.

“The suspicion is that the attackers might have kept a tab on his schedule to the farm which made them to lay an ambush.”

Asked about the nature of the farm, the source added: “It is a large-scale type. Governor Ortom does crop farming, piggery, poultry, a large rice farm, soybeans, fishery and he has a cattle ranch.”

When contacted last night, the Chief Press Secretary to the Governor, Mr. Terver Kaase, confirmed that Ortom was “on foot when he was waylaid.”

“Officers and men of Operation Whirlstroke have moved to the area. Both the police and other security agencies are investigating the incident.”

No arrest had been made at press time.

There was also no response from the State police Command.

He neither picked his call nor responded to the SMS sent to him.

It asked President Muhammadu Buhari to “put machinery in motion by ordering an immediate manhunt, arrest and prosecution of the assailants and beef up security around the governor.”

The party in a statement expressed shock that the assailants “trailed Governor Ortom and opened fire on him and his aides along Makurdi/Gboko Road, in an attack that by every indication is aimed to assassinate the governor.”

The party said it was “worried that this brazen attempt on Governor Ortom’s life is coming on the heels of his outspokenness in exposing those allegedly behind the incessant attacks of communities in the state and demanding that the Federal Government should live up to its responsibility on the protection of life and property in the state.”

Continuing, it said: “The @OfficialPDPNig fears for the life of Governor Ortom and we urge Nigerians to hold the @OfficialAPCNg -led administration responsible over its failure to take a decisive step to check the escalated insecurity and brazen attacks on innocent Nigerians.”

The PDP however told Ortom not to be “deterred by the attack but to remain courageous and at alert, at all times while providing leadership to the people of his state.”