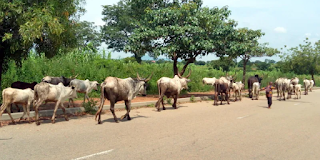 Some suspected herdsmen have killed a woman identified as Elizabeth Pascal in Ogun State.

Ms Pascal was attacked, according to the police, on Monday evening at CAC Olorunda, Moriwi community of Imeko-Afon Local Government Area of the state.

She was returning from the stream where she went to fetch water for domestic use when she was attacked and killed.

The traditional ruler in the community, Akintunde Akinyemi, confirmed the killing.

He alleged that the killing was by suspected Fulani herdsmen, who have continued to terrorise the Yewa axis of the state.

“Yes, it is true. The lady was killed today (Monday) by Fulani herdsmen around Imeko-Afon. She went to the stream and on her way coming, she met the Fulani herdsmen and they killed her. It happened around 3 o’clock, according to the report”, he told Punch Newspaper.

“The lady killed was a Benin Republic indigene who lives in Imeko. She was hacked to death on her way from the stream in Imeko-Afon area. Her husband already claimed her remains and had taken it to Benin Republic,” the police said.

On Tuesday, the governor of the state, Dapo Abiodun, announced the deployment of 10 patrol vans and 20 motorcycles to the Yewa axis of the state, to help check the menace of herdsmen in the area.