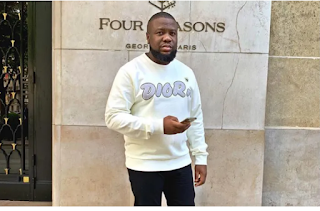 This followed the withdrawal of Gal Pissetzky and Vicki Podberesky, his former attorneys.

PREMIUM TIMES had reported how the duo withdrew after months of negotiations with the U.S. government.

Recall that Mr Pissetzky, a top Chicago lawyer was initially hired to defend the 37-year-old but was later retained as a record counsel due to the transfer of Mr Abass to Los Angeles and the lawyer’s inability to practise outside Chicago.

As a result, Ms Podberesky, a California-based criminal defence lawyer, was hired as his local counsel.

In the application dated January 21, Mr Pissetzky, who claimed to have been negotiating with the government over the case, said Mr Abass suddenly stopped communicating with him.

“Since Mr Abbas’ arrest and arrival in the Central District of California, I have received voluminous discovery from the government and have been diligently reviewing it and investigating the allegations in this matter.

“My communications with Mr Abbas are by telephone given my inability to fly from Chicago to Los Angeles due to the pandemic. Ms Podberesky, as local counsel, has made several visits to see Mr Abbas at the Santa Ana Jail and has also communicated with him by telephone,” he said.

Their request was, however, granted on February 22 and an order was issued in that regard.

However, on February 25, the order on request for substitution was granted and Mr Shapiro was approved as the new defence counsel.

According to his records, Mr Shapiro was once a deputy public defender in Los Angeles County.

He is also considered as one of the top criminal defence attorneys in Los Angeles as he regularly trains new attorneys in the “most effective approaches and methods to handling criminal law matters.”

Mr Shapiro, a certified criminal law specialist by the State Bar of California, serves as a Criminal Justice Act Federal Trial Panel attorney for the Central District of California.

The panel is a group of qualified and court-approved attorneys who are eligible for appointment by the Court to represent individuals in criminal cases who are unable for financial reasons to retain counsel.

Earlier in June 2020, the 37-year-old known for flaunting his opulent lifestyle on social media, was arrested in Dubai by some special operatives including the Emirati police officers and Federal Bureau of Investigation (FBI) operatives.

The FBI’s investigation, according to the affidavit obtained by PREMIUM TIMES, revealed that Mr Abbas finances this extravagant lifestyle through crime.

He is alleged to be the leader of a mafia that facilitated computer intrusion, Business Email Compromise (BEC) fraud and money laundering. His targeted victims, majorly in the U.S, have been duped of hundreds of millions of dollars, the FBI says.

In July, Mr Abbas alongside Olalekan Ponle, popularly known as Woodberry, was extradited to Chicago in the United States where he was first arraigned.

However, because the U.S Court in Illinois does not have jurisdiction over the case, he was transferred to Los Angeles, a city in California, where his trial will commence in May.

At pretrial, he pleaded not guilty to the four counts of conspiracy to commit wire fraud, money laundering conspiracies, international money laundering and engaging in monetary transactions in property derived from specified unlawful activity.

According to the chamber orders of Judge Otis Wright released September 23, 2020, the jury trial that was suspended because of the COVID-19 pandemic will continue by 9 a.m. on May 4.

If convicted, Mr Abass may spend the next 20 years in a U.S. prison.