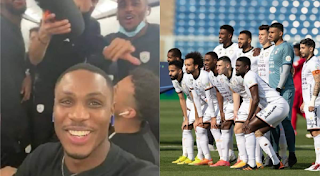 In the encounter against the hosts, Odion Ighalo shined as the former Manchester United striker netted his first brace in the Saudi Arabian League which gave his team the maximum three points.

Ighalo had failed to find the net in his last two matches, however, he rediscovered his scoring form to lead Carlos Inarejos’ men past their relegation-threatened opponents.

And after the final whistle, Odion Ighalo and his teammates were in a joyous mood inside the team bus, singing Davido's song in loud voices.

According to the video posted by Jude Ighalo fans on Facebook, the Nigerian striker can be seen recording while his teammates were singing with him.

As things stand presently, Odion Ighalo and his teammates at Al Shabab are still topping the Saudi Arabian League table with 44 points after 21 games played so far.

Ighalo is not the first Nigerian to play in the Saudi Arabian League as the likes of Super Eagles captain Ahmed Musa and John Ogu have also played soccer in Saudi.