It’s not too much to ask for security, Kukah tells FG - The Naija Weekly

Home News It’s not too much to ask for security, Kukah tells FG

It’s not too much to ask for security, Kukah tells FG 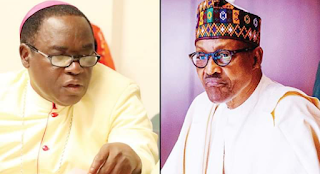 Bishop of Sokoto Diocese, Matthew Kukah, says it is not too much for Nigerians to ask the Federal Government to secure lives and properties, adding that government at all levels must provide the enabling environment for citizens to thrive.

The cleric known for his criticisms of the regime of the President, Major General Muhammadu Buhari (retd.), stated this on Sunday during a virtual interview with academic and historian, Toyin Falola.

His comments came amid the rising insecurity in all parts of the country with bandits, insurgents, kidnappers and other criminals having a field day terrorising Nigerians.

During the interview monitored by The PUNCH, Kukah also lamented that politicians fall back on clerics when they don’t deliver on the issues of governance but stressed that the Nigerian state must run with a sustainable vision for all to thrive.

According to him, economic discontentment amongst Nigeria is one of the causes of insecurity in the country.

“So, for me, in the final analysis is how do you create an environment where everybody thrives according to their abilities? That is the responsibilities of those who create and manage the state because not everybody is going to be a civil servant, not everybody is looking for a job from government, people just want to be able to do the things they need to do.

“But now, if you have a country where you can’t even do the things you want to do whether you are a government official or a private citizen because of insecurity, because the light is not there, because the roads are not there, then you have a problem. You don’t need a prophet to tell you that that society is breeding and creating discontentment that could manifest itself in violence.”

Continuing, the cleric noted that Nigerians are “terribly angry” over the insecurity in the land, economic hardship, amongst others.

He said, “The challenge is for us to create a conducive environment and this is why I worry about this government because the government has not created a narrative that points in a direction that we should be going. We don’t expect the President to do everything, we are not expecting angels, but it is that a nation has to survive on a vision about where we are going and how we are going to get there. But when you raise this question, people begin to think that you are an enemy of the state or that you are inciting citizens.

“You don’t need to incite anybody in Nigeria because government has created an environment for that development by making loose a bunch of people going around killing everyone. Who do you need to incite? You can only incite the government to take its responsibility to secure our country, it is not too much to ask.”

Kukah also said nobody will gain anything if Nigeria breaks up.