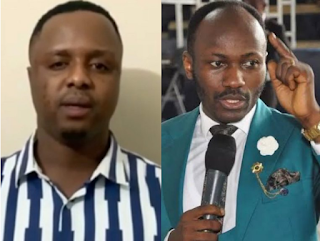 A former Pastor in Omega Fire Ministries, Mike Davids who accused Apostle Suleman, of sleeping with his wife has come out to beg for forgiveness of his claims.

Davids recently accused the pastor of sleeping with his wife, Faith Edeko, who currently heads an Abuja branch of the church, said in a previous video that he and Apostle Suleman both know how they got Otobo to come to the church in Auchi, and apologise over the scandal and how they persuaded her mother too.

He later released an audio clip in which the General Overseer of the church, Suleman had allegedly threatened him.

While Suleman had, in video, apologised for being angry towards the lady he was rebuking her in the original audio for stalking him. The Clergyman noted that the conversation released by his former pastor was doctored and false.