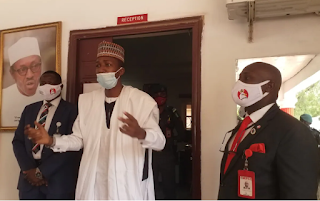 - New EFCC boss Abdulrasheed Bawa has vowed to ensure the agency operates within the ambit of the rule of law.

- Bawa said he would not hesitate to quit his position if directed to do anything that is against the law.

- The EFCC chief also urged Nigerians to stop worshipping rich people, noting that questioning people's sources of wealth is the right thing to do.

Abdulrasheed Bawa, the chairman of the Economic and Financial Crimes Commission (EFCC), says he will resign from office if he’s asked to do anything against the law.

In a statement posted on Facebook on Saturday, March 27, the anti-graft agency said Bawa stated this on Friday, March 27, when he featured on One-on-One, a programme on Nigerian Television Authority (NTA).

He said: "If anybody asks me to do anything contrary to my conscience or against the rule of law, I will resign my appointment."

The EFCC boss said Nigerians need to stop “worshipping people that have money”, and start questioning the sources of their wealth. He said he would not do anything contrary to his conscience, and that the EFCC under his watch will abide by the law. Bawa was quoted to have said: “We need to change our attitudes in Nigeria. We are in the habit of worshipping people that have money in the society, but never bother to ask questions about their source of income. “In winning the fight against corruption, we are engaging all stakeholders including religious leaders, community leaders and others.

“We are going to embark on massive public enlightenment to sensitise people on the need to shun corruption in all its forms." Bawa promised to continue to do what is right, noting that the EFCC under his watch will continue to abide by the rule of law.