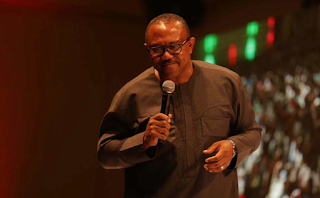 Obi a former vice presidential candidate, said such actions by the government are inimical to the economic growth of Nigeria. He noted that while the government is comfortable paying bandits, the authorities have refused to pay those contributing to the economy like lecturers, researchers, and intellectuals. Obi decried the increasing level of insecurity across the country, with banditry and kidnapping breaking new frontiers, adding that the situation was worsened by the government’s treating of insurgency as a legal business.

Obi warned that the country will be stagnated if the policy of paying bandits and ignoring intellectuals continue. Photo credit: @PeterObi Source: Twitter

According to him, such a position by the government was emboldening the criminals. The Nation reports that Obi made the comments at a launch of a book written by the first Nigerian female professor, Professor Stella Okunna. His words:

“How do we go and negotiate and pay somebody, a bandit, when we have not paid those who’re working? “We are owing those who have legitimately worked. And we are negotiating and paying those who have stolen kids. It is a criminal system. It is important we walk away from it. “Lecturers are owed. How do we compensate those who have not contributed anything to the economy? The economy is not productive, and that’s why it is failing. “So, kidnappers, bandits and other criminals are called to a meeting, but professors are not called to any meeting. May God help Nigeria.”