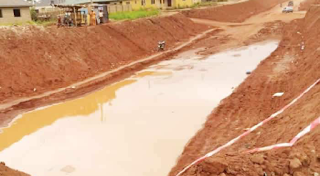 Residents of Ori-Osoko in the Abeokuta South Local Government Area of Ogun State have accused the Federal Government of using the Lagos-Ibadan railway project to destroy the roads that linked the community to neighbouring communities.

The residents alleged that about eight major roads had completely been damaged by the contractor in charge of the project, the China Civil Engineering Construction Corporation.

The Chairman, Ori-Osoko Community Development Association, Egbeyemi Olakunle, lamented that the poor condition of the roads to journalists on Tuesday, adding that residents’ children could no longer go to school.

Olakunle further lamented that the residents could no longer take their vehicles out of their houses, especially during downpours.

He stated, “We have about 14 roads that connect us with over 30 communities. Eight of the major roads have been damaged by the CCECC.

“We spent nothing less than N200,000 annually to repair each of the roads.

“Our roads are in a very poor condition and this has led to a situation where most of our children cannot go to school, while those with vehicles cannot come out of their houses, especially during downpours.”

The community leader said all efforts to get the attention of the contractor had proved abortive as nothing had been done to relieve the residents of their suffering.

He also complained that the government was planning to name the railway terminal after another community.

Olakunle stressed that the residents were against the naming of the railway terminal after Laderin community, which he said was 15 kilometres away from where the terminal was located.

He appealed to the Federal Government to consider naming it the Ori terminal because the community had suffered the greatest loss.

“To buttress our point, the Ori-Osoko community has suffered a lot due to the demolition of houses and disruption of commercial activities to pave way for the construction of the rail line though the Federal Government, in its own little way, compensated those affected with various sums according to the nature of the structures,” he added.

When contacted, the Public Relations Officer of the company, Olushola Kolade, confirmed that there had been a series of meetings over the issue.

Kolade said the company would look for possible solution on the community’s complaints.

He stated, “We have had a series of meetings with the communities and some of the issues raised were addressed, but that particular one we are of the view that when the work is completed on the Abeokuta station, then we will get it done, because there are still treatment of passage in the Abeokuta station for now.

“We are also working with the deadline, but having discussed with one of the community representatives. I will pass it across to the company to make the possible solution.”