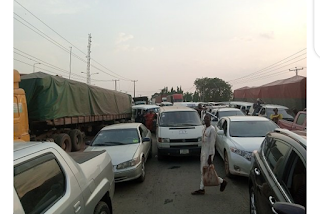 Passengers and motorists have recounted their harrowing experiences during last weekend’s gridlock on the Lagos-Ibadan expressway, which left many stranded.

Many passengers were seen trekking long distances to get to their various destinations.

Several convoys were also trapped while many motorists slept on the highway as a result of the traffic snarl.

The Nation’s correspondent, who traveled along the route over the weekend, spent about 10 hours in traffic before joining other commuters to trek.

It was observed Oriental axis – Odo Ona under the bridge – Guru Maharaj – Tollgate was totally locked down.

Operatives of the Federal Road Safety Corps (FRSC) and other security agencies had been battling to ease the gridlock since Friday, The Nation learnt.

Our correspondent gathered that the gridlock started around the Orienta axis on the expressway where a construction company had closed a lane and diverted traffic to the other lane.

While there was no accident or any sort of breakdown on the route, it was learnt the impatience of motorists led to the massive gridlock.

Ikuolaju Adesola, who was also stuck in the traffic snarl, said: “For the past 5 hours there has been a complete standstill.”

He explained “the root of the standstill is the ongoing construction along the Guru Mahraji axis of the expressway.

Ope Sunday, who was seen contacting some persons, asked them to pray for commuters along Lagos-Ibadan Expressway.

He said: “People are going to sleep on the road this night. The military, FRSC and well-meaning helpers are terribly overwhelmed.”

Another commuter, Tosin said: “The Ibadan end of Lagos-Ibadan expressway is turning to be another thing. I left my office around 2 pm, got to Berger around 2.45 pm or thereabout and got home in Ibadan around 2.20 am. What a 12-hour trip! Chai!

Ago Omojao said: “With the heavy standstill on the Lagos Ibadan expressway, a marriage was blessed on the spot and people in the traffic shared foods. Problem solved.”

It was observed there was free flow of vehicular movement on Sunday but a portion of the Guru Marahji axis remained closed.