Singer Paul Okoye has paid a visit to the new house of music mogul Don Jazzy as he recently revealed to his fans and followers on social media.

Paul shared photos from his visit and they showed his brother Jude, DJ Big, Richard Nnani, and their other friends.

In one of the photos, six men including Don Jazzy were spotted at a table with different delicacies.

With food in their mouths, the men looked serious as if they were having a conversation. According to Jude, it is a table of men. 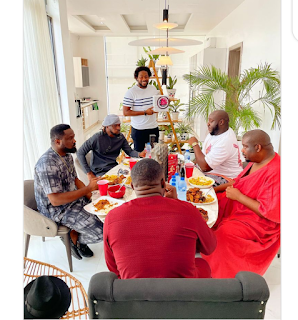