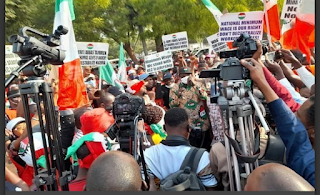 The Leadership of the Organized Labour in Nigeria on Wednesday led thousands of Nigerian workers to protest at the National Assembly.

The protesters chanting solidarity songs and carrying placards with various inscriptions arrived the forecourt of the National Assembly at 11am.

They had earlier converged at the Unity Fountain in Maitama from where they marched with their banners, placards with accompanying loud music into the National Assembly.

The procession of the protesters disrupted vehicular traffic as most lawmakers, staff and visitors alike were forced to make a detour into the National Assembly complex through the Villa and the Secretary to the Government of the Federation (SGF) gates.

Commuters and drivers in and around the popular Ahmadu Bello Way, Shehu Shagari Way and the Federal Secretariat had a hectic time assessing their destinations while the procession was on.

The Deputy Chief Whip of the Senate, Senator Aliyu Sabi Abdullahi met the protesters at the MOPOL gate of the National Assembly and joined them in marching into the main complex.

The protesters were officially received at the forecourt of the National Assembly by the Senate President Ahmad Lawan represented by Senator Sabi Abdullahi and the Speaker of the House of Representatives Femi Gbajabiamila represented by the Leader of the House, Honourable Alhassan Ado Doguwa.

Both Senator Abdullahi and Honourable Doguwa in their remarks assured the Labour leaders and the protesters that that the National Assembly would ensure that the Bill does not see the light of day.

Abdullahi assured the workers that the Bill will be killed the way a similar Bill was killed during the 8th National Assembly.

“Like somebody said earlier we are progressive lawmakers and I want to tell you there are quite a large number of them in the National Assembly.

“Remember in the 8th Assembly, I was the spokesman of the Senate and I recall vividly that this issue of minimum wage was brought and we killed it.

“Has the condition that led to the 8th Assembly decision changed? I therefore want to say very clearly that in the past we have stood toe to toe with the Nigerian workers.

“There is nothing that suggests we are changing from that direction rather we will stand by you to ensure that the fundamental right of every worker is not only enforced but is ensured and guaranteed.

“Therefore I want to guarantee you that on behalf of Distinguished Senator Ahmad Ibrahim Lawan, who is also a very progressive lawmaker, do not go home having any fear.

“Go home and sleep with your eyes closed. We are going to ensure that we are going to do justice to the message you have brought to us.

“Action speaks louder that voice. Wait to see the action. I want to assure you that our colleagues will receive this message in full measure without any subtraction or addition.

“The way you brought it is the way they will see it. In assure you that justice will not only be done but will be seen to be done Insha Allah,” Abdullahi said.

Hon. Doguwa in his remarks said it was clear that that Nigerian workers are against the minimum wage Bill and therefore the House would listen to the wishes and aspirations of the organized Labour in the country.

He said that the only justice that can be done to the Bill is to kill it.

Doguwa said: “You are in the right place and the right institution which is a representation of the general membership of organized labour in Nigeria.

“May I say on behalf of my Speaker and the entire members of the House of Representatives that we are also by extension members of the organized labour. We are your employees.

“By this implication, we have no reason whatsoever to shy away from the interests and yearnings of Nigerian workers. When you are happy we are happy.

“I therefore say on behalf of the Speaker and the House that we have accepted the letter written and signed by the PreProtesters storm National Assembly over minimum wage Billsident of the organized labour and we are going to give it the right treatment.

“There would be an opportunity to come and address us through a public hearing. That initiative is only an opinion. The recommendation of that Bill is only a proposal.

“From what I am seeing now it is clear that organized labour is against that Bill. I want to assure you that the House of Representatives would give a listening ear to your message.

“We will still invite you to come and engage with the relevant committee of which I am a member.

“You will come and make your position fully. Your position will be heard at the committee level and when we come to plenary to consider the bill, members that are representing your respective communities, engage with them to do justice to that Bill and I can assure you that the only justice would be to kill the Bill.

“I want to advise that you should please lobby members that you elected and tell them that you do not want the bill and members will make sure the bill is killed.”