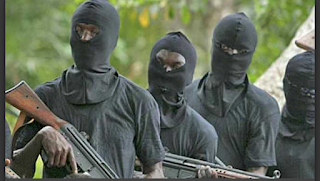 Dare devil armed robbers in a pre-dawn raid killed one conductor and injured another driver of a luxury bus on Wednesday at Onisere, via Ore, in Ondo State.

The incident paralysed activities on both sides of the road, as protesting luxury drivers blocked all inbound and outbound traffic for over 10 hours causing an unprecedented traffic gridlock as they insisted on being addressed by Ondo State Governor Rotimi Akeredolu and the Commissioner of Police on what is being done to assure them of their safety.

They argued that the spot of the robbery attack is just immediately after a military check point on the road, and despite the closeness, no help came to the hapless victims for the over one and half hours when the operation lasted.

The robbers were said to have carried out the operation in a brand new Toyota Sienna SUV, with which they made their escape after robbing six passengers.

The Sienna has registration number LSR 354GK, while the luxurious buses, belongs to The Young Shall Grow and Ezenwata.

The names of the dead drivers who drove the two buses are Francis Duru and Sunday Wahwa.

According to the driver of the Sienna, who spoke under anonymity, the robbery operation started at about 2am, when the robbers snatched his vehicle after robbing all the passengers in the Vehicle.

He said the robbers thereafter used the vehicle to block the road, adding on sighting this driver of one of the luxury buses tried to escape and in the process, he was shot point blank with a bullet piercing his heart.

He explained that the robbers forced the driver’s door of The Young Shall Grow Motors open but the driver resisted.

This made the robbers to shoot him with one of the bullet shattering his hand, while another lodged in his heart killing him instantly.

While some of the passengers were robbed at gun point, others jumped out of the window into nearby bush.

One of The Young Shall Grow Motors drivers, who spoke on anonymity, said they have reported the incident to their management.

The police team who spoke with The Nation said investigation has already commenced on the incident and the nearby bushes are being combed for likely victims, while they are on the trail of the robbers.