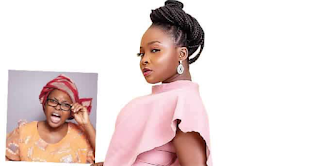 Kemi Ikuseedun, popularly known as Mummy Wa, is an online comedian and actress. Well known for playing ‘Mummy wa’, a fictional wife to the social media character, Mr Macaroni, in comedy skits, she has 122,000 followers on Instagram. She talks to OLAJIDE SAMUEL about her life as a social media celebrity

How did you venture into online comedy?

I started doing comedy around 2018. I used to go for auditions but they were not really forthcoming, so I started doing online comedy skits. That was basically how the journey started.

What led to the creation of the character, ‘Mummy Wa’?

Debo Adedayo, aka Mr Macaroni, actually created the character, ‘Mummy Wa’. One day, he saw me acting in a skit of mine and he called me to be part of his skit the next day. He asked me to play the role of his wife. That was how the character was born.

How do you get ideas for your skits?

I get the inspiration for my skits from life― the things that happen around me, as well as the experiences of other people. I also get ideas from comedy shows and movies. Most times, I feature in other people’s skits, so I hardly do most of the thinking.

How would you describe your relationship with Mr Macaroni?

My relationship with Mr Macaroni is more like that of an elder brother and sister. He is my boss. He brought me out of a particular stage of my life and gave me a character that I am really grateful and happy for. Being in this industry made me meet some really special, intelligent and smart people. Adebayo Abidemi, popularly known as Isbae_U, is one of such people. I am very grateful and happy that I am doing something I love with him. I also appreciate Mr Macaroni, and I constantly thank him for everything he has done for me. I thank him for giving me the platform (to showcase my talent).

How does it feel being a social media celebrity?

I cannot say that it feels like everything I have ever wanted. It feels quite normal to me. There is nothing really special going on.

In the process of building your brand, have you ever been frustrated?

Yes, I am always frustrated. However, I feel like we are gradually achieving our dreams and getting to the top.

What are the challenges you have faced over the years?

Some of the challenges I have faced over the years include going for auditions and not being given roles to play. It was very discouraging going for so many fruitless auditions and seeing people do what I felt I could do. There were also some people that came my way, claiming they could give me roles; only to find out their true intentions were not genuine.

Have you ever been a victim of online bullying?

Yes, I have been a victim of that. It seems some people just feel the need to talk trash at times.

How were you able to build your fan base on Instagram?

I built my fan base through the appearances I make often in comedy skits. However, I cannot really say it is by my might. It is wholly by God’s grace that I am at this point. I also had help from a lot of people and I am grateful to everybody that helped me along the way.

Which of your videos brought you fame?

I cannot really pinpoint a particular video that brought me fame. I feel all the videos I have been doing have been remarkable, and they all contributed to where I am today.

Beyond being a social media comedian and actress, what other things do you do?

For now, I concentrate on my acting and social media comedy career.

What doors has your presence on social media opened for you?

Before now, it used to be difficult to get roles. But now I get roles relatively easier. People send me messages on social media and invite me for closed auditions.

Do you get funny requests from men?

Yes, I do. I get a lot of funny and nasty requests from men.

What are some of the feedback you have got from your fans about the impact of your work?

People tell me I inspire them and make them laugh.

What advice do you have for young talents who aspire to be like you?

I would advise them to keep working hard and keep being consistent. God would answer their prayers one day.

What differentiates you from other comedians?

That would be the roles I play. I just don’t play one role. I can play any character I am given convincingly.

Were your parents supportive when you started out?

No, they did not support me initially. But, I thank God they are now warming up to the idea.

Can you date your fan?

To date someone, the person has to be my fan in the first place. But, I think I know what you mean. However, I already have a boyfriend, so I cannot date anybody again.

What are your plans for the future?

I intend to shoot more movies and make short films. I would also continue doing skits and make people laugh. The focus would be on creating excellent content and impacting people’s lives positively.

Would you say being beautiful contributed to your visibility and fast rise in the industry?

I would say no. Being beautiful has not necessarily contributed to my visibility. Some people actually think I am an old woman. I would say it is as a result of God’s  grace and everyone that has been supporting me.

How long do you spend on wearing your costume before shooting skits?

For Mr Macaroni’s skits, I usually wear the same thing because of the role I play. Apart from my own shoot and that of Isbae_U, I wear my everyday clothes. I have only acted as a ‘freaky freaky’ babe twice in Mr Macaroni’s skits. After then, people did not even know it was me when I started playing the ‘Mummy Wa’ role.

As a social media influencer, can you endorse a sex enhancement product or drug?

Yes, I can. There are people who have these issues and problems in their marriages and relationships, and they need solutions. It is something that I can do.

I love to dress as comfortably as possible. Being comfortable when it comes to fashion is important to me. I basically like to look classy and comfortable.