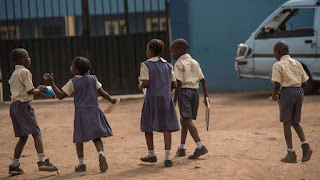 There was an Unfortunate Incident that happened in our Former School *Rev. Kuti Memorial Grammar Sch* this week.

Last week Wednesday, a group of *JSS 1 students* (Three in number) double crossed a girl, a *JSS 2 student* at *Oke Bode* on her way home after school hours and gave her a *Serious Beating* of her Life simply because one of the JSS 1 boys reportedly toasted her and she refused his advances.

Naija Weekly gathered that the young girl didn't immediately report the matter to her parents at home but was seriously weak and they started treating her not knowing there was an injury & internal bleeding.

After few days she confessed what transpired that caused her the injury and her Parents reported the matter in the *Principal's office* on Monday when the school resumed from Mid-Term Break and was on their way to the *General Hospital Ijaye Abk from Private hospital.*

However, the Principal fished out the culprits (the three JSS1 students) and were immediately suspended and handed over to the *National School Crime Prevention Corps* attached to the school for Rehabilitation.

The culprits' parents were invited the next day to ascertain the level of damages to the young girl and were asked to pay all the hospital bills.

But her condition got worse that *General Hospital ijaye* had to refer her to *FMC idiaba* Abeokuta where the young girl was put on *Life Support Machine*.

On Thursday, *the JSS 2 girl died* and the Culprit Three JSS1 students were taken to Ibara Police Station and were detained.

Very sad ☹️. May her soul rest in peace. Justice must be done immediately, no cover up. All hands on deck please.