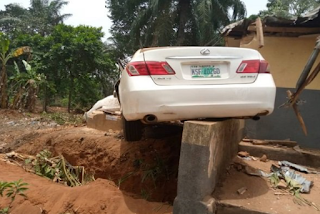 The crash, which occurred around 7pm on Sunday involved a Lexus ES350 car with registration number KSF 403 GD.

The Nation gathered that the driver of the vehicle was on a top speed when he suddenly lost control and knocked down two women crossing the road, before crashing into a building by the side of the road.

Confirming the incident, Sector Commander, Federal Road Safety Corps (FRSC), Andrew Kumapayi said the body of the deceased had been deposited at the mortuary.

He enjoined drivers to desist from speeding but apply the recommended speed limit of 50km/hrs in built up areas.

He said: “An Unidentified driver of a Lexus ES350 car with registration number KSF 403 GD was involved in the fatal crash.

“Two persons, 1 male and I female adult sustained varying degrees of injuries and were taken to Apex hospital Igboukwu, while 2 persons (1 male adult the driver and 1 female adult) were confirmed dead by the doctor on duty.

“Their body deposited at Apex Mortuary by a good Samaritan before the arrival of FRSC rescue team from Igboukwu Command.”