UFC 259: Adesanya lands powerful shots on Blachowicz in Round 2 - The Naija Weekly

UFC 259: Adesanya lands powerful shots on Blachowicz in Round 2 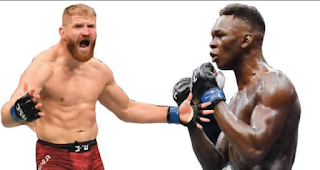 An evenly contested round for both fighters, Blachowicz landed some powerful shots but Adesanya showed that despite moving up in weight, he has the chin to take the power shots.

Blachowich grappled Adesanya but the Nigerian-born star quickly released himself.

The fight was stopped for 10 seconds after Adesanya landed below the belt on his opponent.

Adesanya did enough to stop Blachowicz in his strike and refused to be taken down.

The third round should be more explosive.

Israel Adesanya intends to burnish the legend as he aims to become the fifth fighter in UFC history to become a two-weight champion simultaneously.

The Nigerian steps into the octagon against Jan Blachowicz, the light-heavyweight title-holder, in a bid to add to his middleweight championship honours.

The Pole is bigger, more experienced, and older, but Adesanya had said none of these qualities trouble him.

Adesanya has made a career of trashing reputations, his speed, power, and movement combining to build an unbeaten 20-0 record.

If the “Stylebender” is able to defeat Blachowicz, he’ll join Conor McGregor, Daniel Cormier, Amanda Nunes and Henry Cejudo as one of just five fighters in UFC history to hold titles in two divisions simultaneously.

That accomplishment would solidify his claim as one of the best UFC fighters ever.