Wike was my staff, I can’t bring myself low, says Amaechi - The Naija Weekly

Home News Wike was my staff, I can’t bring myself low, says Amaechi

Wike was my staff, I can’t bring myself low, says Amaechi 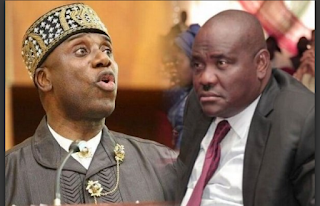 The minister of transportation, Rotimi Amaechi, has said he will not descend to the level of Rivers State Governor, Nyesom Wike, by exchanging words with him.

Speaking on Arise TV “The Morning Show” on Thursday, monitored by The Nation, Amaechi said he did not want to discuss about Wike whom he has surpassed on all levels.

Amaechi, who also spoke on the benefits of the Eastern Rail Corridor, said “The overriding desire of government is to create jobs in the rail sector”.

The Nation reports that Wike had berated the Federal Government for commencing a narrow gauge rail line from Port Harcourt to Maiduguri at a time the rest of the world was building standard gauge railway.

Reacting to Governor Wike’s claim that his projects are politically motivated, Amaechi said, “I don’t think I want to address the issue of the governor, I have made my point and I have moved on.”

“He was my staff, I can’t bring myself low. I was a governor, I was also a speaker, I’m a minister. I was two-term chairman of governors’ forum. The same when I was a speaker. Why should I be discussing him?”

“I only say that I don’t make statements under the influence of alcohol. Some people are attaching meaning to what I say,” he added.