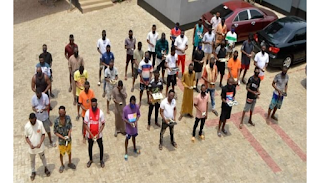 No fewer than 67 suspected Yahoo boys have been arrested in Ogun and Ondo states in a crackdown by the Economic and Financial Crimes Commission (EFCC) on internet fraud and related offences.

Thirty-three of the suspects were arrested in Ogun while 34 were apprehended in Ondo.

Operatives of the Ibadan Zonal Office of the Commission picked up the suspects yesterday in Abeokuta, the state capital.

Head of Media and Publicity Wilson Uwujaren said in a statement that they were apprehended in Adigbe, Oloke, Ibara Housing Estate Extension and Idi Ori areas of the state capital, following actionable intelligence.

Some of the Ondo suspects were arrested in Owo, headquarters of Owo Local Government Area, some of them said to be students of Rufus Giwa Polytechnic, Owo .

It was gathered that the EFCC operatives broke  into their apartments at night in an operation codenamed ‘Erinle’.

Uwujaren said investigation into the matter had begun and that the suspects would be charged to court on completion of investigations.