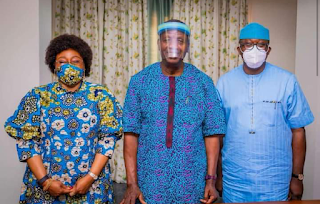 Speaking with The PUNCH after the meeting, the Chief Press Secretary to the governor, Yinka Oyebode, said the 79-year-old cleric paid a courtesy call on the governor.

He added that Adeboye and Fayemi also discussed issues of nationhood.

According to Oyebode, Adeboye condemned the recent attacks by gunmen on monarchs in Ekiti State, describing the act as flagrant disrespect to the traditional institution.

Adeboye, who assured that God would put an end to the reign of terror and violence in Nigeria, however, urged Nigerians to continue to pray for the country’s survival in view of the problems confronting it.