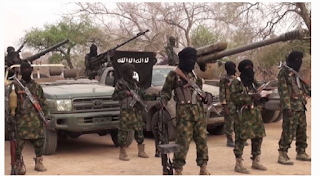 Niger has for many years battled Boko Haram insurgency, with Shiroro, which houses one of Nigeria’s electric dams witnessing some attacks.

Governor Sani Bello on Monday announced the displacement of many residents by Boko Haram insurgents around Munya and Shiroro local government areas.

According to him, over 3,000 people have been displaced by bandits and Boko Haram elements around the areas.

“There are some other communities that we think are safe but a vast majority of them will have to remain here because their villages and towns have been taken over by the Boko Haram elements,” the governor said.

“I just heard they have already placed their flag in Kauri which means they have taken over the territory,” he said, expressing fears that they could soon march on Abuja, which shares a border with Niger.

Also backing the governor’s confirmation, the police source who fled Shiroro told The Gazette that the community, Awasha, Chiri, and many others were under the control of Boko Haram insurgents, who also control trades.

Although many believe that it funds itself through kidnap for ransom and looting local communities, the police source stated that it generated income through taxation.

According to him, the insurgents now impose taxes on local farmers and fishermen who fish around the Shiroro lake, and residents made to pay VAT when local transactions are carried out.

The army spokesperson, Mohammed Yerima, ignored calls and a message seeking his comment on the situation.

However, the state police spokesman, Wasiu Abiodun, told The Gazette on the telephone that he was unaware of the situation.

“Let me verify and get back to you,” he said.

The insurgents have in past years occupied dozens of villages around Lake Chad, thereby generating income from the residents.

Reports said a faction of the group, ISWAP, set up state-like structures in the Abadam, Kukawa, Guzamala, Marte and Monguno local government areas in Borno.