Boko Haram: Under Buhari, criminals only paraded not prosecuted: Ndume - The Naija Weekly

Boko Haram: Under Buhari, criminals only paraded not prosecuted: Ndume 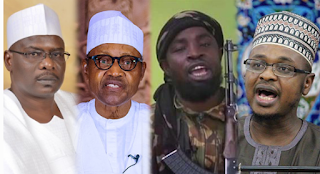 Chairman of the Senate Committee on Army, Ali Ndume, has accused President Muhammadu Buhari’s regime of only parading suspected criminals but do not prosecute them.

On Sunday, the senator told reporters that Mr Buhari’s regime had a history of parading criminals without prosecuting them.

He said, “Nowadays, criminals are arrested and paraded without further action. Nobody knows what happens to the people who killed 11 soldiers in Benue state recently. What happened to those who beheaded policemen in Cross River?”

He also demanded that the trial of the suspects should be public, insisting the government must punish the guilty.

“The Presidency said, recently, that Nigerians would be shocked if it revealed the identities of those who are sponsoring the Boko Haram insurgents. Can you imagine that 400 bureau de change operators are the people funding Boko Haram?” the APC senator asked.

Last week, Mr Buhari and the ruling APC threw their weight behind Isa Pantami, communications minister, despite damning evidence that he supported terrorist organisations like the Taliban, Al-Qaeda and Boko Haram.

He added, “When the BDC operators are arrested now, what will the government do with them? The Presidency is already saying their case is confidential. What is confidential about it?”

Mr Ndume himself was linked to Boko Haram in 2011.

Explaining his ordeal, he stated, “When I was wrongly accused, I was tried publicly, and I was vindicated. The trial lasted six years in an open court. If there is any criminal act linked to anybody, no matter how highly placed, let the evidence be placed before the public. There should be no secret trial.”

Peoples Gazette in November reported that a Nigerian government official was indicted for channelling stolen public funds to finance terrorism.

Six other Nigerians in the UAE were convicted of funding Boko Haram in 2019. The conviction was upheld after an appeal.